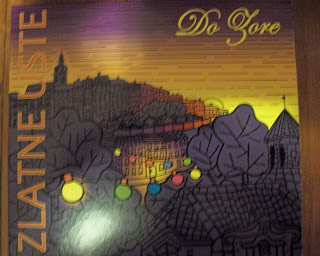 This band is one of a kind, a group of musicians from New York City who got involved with Balkan folk dancing many years ago. They liked the music so much that they taught themselves to play it, created a band, and called themselves Zlatne Uste (Golden Lips).

They held their first Golden Festival at the Folk Arts Center in lower Manhattan in January of 1985. This is the sound that compels you to get up and dance (or at least tap your feet). The ground beneath you shakes when they play, and the excitement in the room is a living thing.

Each year the festival grew larger and larger as word of mouth spread the news about these New Yorkers having a blast with music from Serbia, Macedonia and Bulgaria. Most of their repetoire, however, is Serbian and Roma (Gypsy). The music on this video clip is Roma.

Here's a link the 2010 festival, which also happened to be its 25th anniversary: http://www.zlatneuste.org/au25.htm

And a short history of the band with a photo:

They have become so popular that they have been invited to play at the Guča festival in Serbia, not once, but four times. The Serbs were intrigued by these Americans. What interested them most was that none of them had a Serbian background, and that they did an fantastic job playing Balkan brass music. As a result, they became celebrities in Serbia, and articles were written about them in the local newspaper. The festival, which is in its 50th year, turns a sleepy Serbian village into a party town.

Meerkat Media Collective is in the process of creating a documentary film featuring Zlatne Uste, called Brasslands . The actual filming of the festival, along with the band's participation in the competition, is going on this week in Serbia. This is a summary of what the movie is about:

The founder of the band and a couple of the members tell their story in the trailer:

As for me, I have a connection with Zlatne Uste, having been to their very first Golden Festival in 1985.

I have also had the privilege of listening and dancing to them twice this year: Balkan Music Night (in Cambridge):

and during a St. George Day festival in New York City:

I can't wait to see the movie about them. (It's due to be released next year).

This work is licensed under a Creative Commons Attribution-Noncommercial-No Derivative Works 3.0 United States License.
Posted by Katley at 7:24 PM