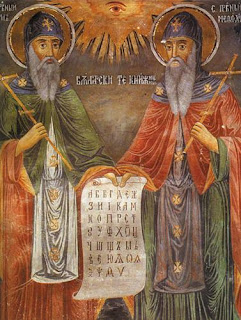 One afternoon one of my daughters came home from class, and I was sitting at my usual spot, in front of the computer.

What really puzzled her was that I had a webpage from Radio Bulgaria on the screen. It was not in English.

“Mom, can you read the acrylic alphabet?"

That malapropism was so cute, although it didn't come from a child, but from an intelligent young woman who just completed her third year in college.

“Marty, I can pick out a word here and there, but if I really want to read this I have to use Google Translate. It translates entire webpages into English (from over 50 different languages, although sometimes something can be lost in translation along the way). And by the way, did you mean the Cyrillic alphabet? I remember you guys learning that in elementary school."

When my daughters started school our town had a large influx of Russian immigrants, and their school offered, as part of the curriculum, classes in spoken and written Russian. I picked up a little Russian and a few words in the Cyrillic alphabet during this time, which helped me with Bulgarian later on.

My daughters have long since forgotten what they learned, and Marty, I remember, had a lot trouble with the “acrylic" alphabet." If you don't use it, you lose it.

Although most people associate the Cyrillic alphabet with Russia, Bulgaria was the first country to adopt it, and it is now one of the official alphabets of the European Union, along with the Roman and the Greek.

In Bulgaria, the Cyrillic Alphabet, or azbuka, has its own holiday on May 24, known as "Bulgarian Education and Culture and Slavonic Literature Day." There is even a song about it:

Although I can recognize a number of words in Cyrillic, and can understand a few words of Bulgarian, this alphabet is still very much a mystery to me. I still have trouble cracking the code, and I don't know how many times I've resorted to Google Translate to decipher Bulgarian web pages.

According to my mom, I taught myself how to read before I started school, and by the time I entered the classroom, I was already ahead of the other kids. I found school boring since a lot of what was taught was stuff I already knew, and I had a knack for getting into mischief.

By the time I was in 6th grade, passing notes to my friends got me into trouble on many occasions. Since part of the problem with the teacher was her ability to read the notes, I invented a code, with a symbol corresponding for each letter of the alphabet, gave my friends each a copy, and we committed it to memory. From then on we were able to write notes that the teacher found impossible to read......

Back in the day, I probably could have learned Russian, or Bulgarian, or any language with a different alphabet, but they weren't taught at my school and I didn't plan to work in the CIA, where I'm sure they had classes in Russian for those considering a career in espionage.

As for the "acrylic" alphabet, for the most part it's still "Greek" to me, and I'm a big fan of Google Translate.

For more on "lost in translation" read my post on Bulgarian proverbs, a humorous take on what happens when folk sayings are translated from Bulgarian to English:

The webpage for Google Translate can be found here:

If you're interested, you can read about the history of the Cyrillic alphabet on Wikipedia.

And a final thought: Has anyone ever come up with the idea of Cyrillic alphabet soup?

This work is licensed under a Creative Commons Attribution-Noncommercial-No Derivative Works 3.0 United States License.
Posted by Katley at 10:09 PM