A Romanian Festival with an Albanian Accent 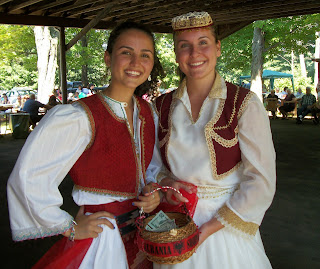 Summertime is festival time, and today's post is about an unusual church picnic that I went to this past weekend with a group of dance friends.

It was held as a fundraiser for the Romanian Orthodox Church in Southbridge, a small town in south-central Massachussetts. During the beginning of the last century,immigrants from Romania came to the United States seeking opportunity. They established churches and social halls for worship and to celebrate cultural events. St. Michael's Church in Southbridge has been a part of the Romanian community since 1924.

The odd thing about this Romanian picnic/festival was that the band played Armenian and Greek music, and the costumed folk dance group presented dances from Albania. Not one Romanian dance or song was performed. This festival was Romanian in name only.

The social hall displayed some very old photos from the church's history, and I got into a conversation with an older woman who was a longtime parishioner. She told me that years ago the church had organized folk dance groups and they performed Romanian dances. What had happened was that the immigrants' children and grandchildren had assimilated into the mainstream culture and lost touch with their roots. So the church invited an Albanian group from an Orthodox church in Worcester to perform.

The Albanian folk dancers, most of who were were recent immigrants to the United States, did a very nice job. They were young and energetic, but they weren't Romanian. Even the Pajduško that they did (which they said was Romanian) was not. The music was definitely Albanian. Albanian music is very heavy on the clarinet, and you can hear it in this video.

Contrast it with this Romanian Pajduško which is faster. It looks and sounds totally different:

The group performed a number of Albanian folk dances, this is a very popular one called Pogonishte.

Albanian music contains a strong Turkish influence. The Ottomans had ruled the country for over 500 years. You can hear it in this modern folk song, Valle Kosovare. Check out the beautiful costumes on the dancers, they were all handmade.

Even though there was no Romanian music, I had an enjoyable time at the festival and it was an interesting cultural exchange. By the way, if I go next year, I may bring a boom box and a CD of Romanian music to play while the band has a break :)

For more about the Pajduško and its popularity in the Balkans read:

This work is licensed under a Creative Commons Attribution-Noncommercial-No Derivative Works 3.0 United States License.
Posted by Katley at 9:37 PM