Why Dancing Makes You Smart 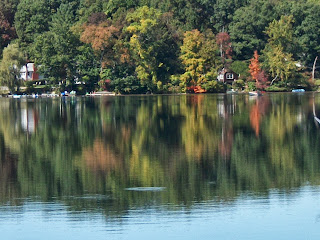 "When the student is ready, the teacher will appear. " (Buddhist proverb)

According to a study done on senior citizens 75 and older by the Albert Einstein School of Medicine in New York City, people who dance are much less likely to develop dementia. The article describes how dancing increases cognitive acuity.

I was probably one of the youngest attendees at a dance workshop in upstate New York, held in late September. The majority were people in their "golden years"; retirees who keep their brains and bodies healthy with frequent folk dancing.  They had amazing energy.

There were workshop sessions in the morning and afternoon; and dance parties that continued late into the night.  The teachers were Yves Moreau (Bulgarian dance) and Danny Pollock (Israeli dance).

Here are two of the Bulgarian dances that were taught at the workshop.  I still have yet to master them although I'd been watching and practicing with YouTube videos for several months before the workshop.

The first is Novozagorsko Horo, from the Thracian region of Bulgaria. It's named after the town of Nova Zagora. This dance has a belt hold which makes it even more challenging, and you have to be in good physical (and mental) shape to do it.  I still can't remember all the steps in the proper sequence. That will take practice.

Yves taught a dance that I've been watching on YouTube for about six months, Vidinkso Horo, and I was glad he chose it for the workshop this year.

Vidinsko Horo is a "hybrid" dance, best described as Romanian steps to Bulgarian music. It is also named after the town of Vidin in northwestern Bulgaria. You also can see similar footwork in the Romanian dance Trei Pazeste. The Vlach people who live in this region have influenced the music and dance. Their dances are characterized by stamps and shouts, and you will see that in the video.

Does dancing make you smart? It does, because it involves a lot of memorization, especially when learning and doing a fast dance with complicated steps like Vidinsko.

Some food for thought here: a brain is a terrible thing to waste.  Use it or lose it.

By the way, the picture above was a view of Sylvan Lake near the building where the workshops were held. The lakefront was a great place to relax and chat with people in between dances.

This work is licensed under a Creative Commons Attribution-Noncommercial-No Derivative Works 3.0 United States License.
Posted by Katley at 2:15 PM