Friedrich Schiller, An Die Freude, first stanza
used by Ludwig Van Beethoven in the last movement of his Symphony #9 in D minor

The first video is the music for the Bulgarian folk dance Opas, played by the Orchester Sabor at a performance in Trier, in Germany.

By the way Trier is a very lovely city.  I have been there many times to shop, visit the Roman ruins, the museums, and drink wine.  The best known structure is the Porta Nigra (Black Gate) which has stood over the city for over 2000 years.  Also, you can see the remains of what were Roman baths. The Roman bridge over the Mosel River carries traffic to this day. There is even a house where Karl Marx once lived; it is now a museum. 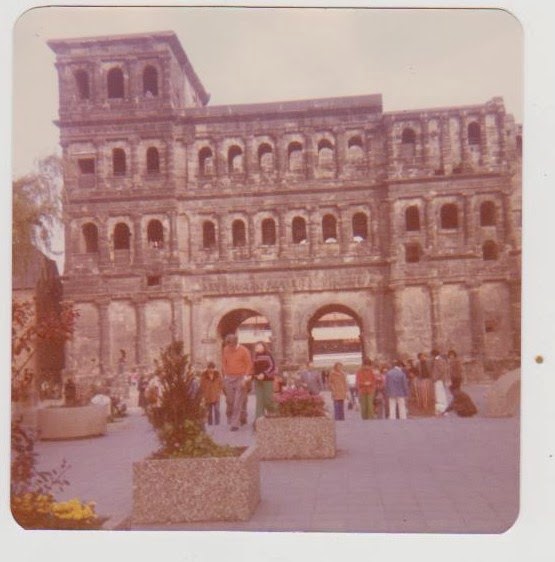 Porta Nigra in Trier, by KDB

What makes this version of Opas unique is that the band uses a bit of Beethoven's Ode to Joy from the 9th Symphony. It has a unique sound played on the gaida and the accordion (violins are more typical symphony orchestra instruments.)  The Beethoven starts at 2:58, but the whole piece is worth a listen.    You can even dance to it (looks like the gaida player wants to give it a try, but I imagine it's difficult to dance and play a bagpipe at the same time).

The next piece is a Hasapiko, which during the Middle Ages was the dance of the Greek Butchers' Guild.  There are many versions of Hasapiko done to different tunes.

This one is based on  Mozart's Symphony #40 in G minor, first movement, and sung in Greek.  I have no idea what the words mean, if someone could post a translation in the "comments" section, it would be much appreciated!

The group is from Hong Kong. If you're a regular here you know that Balkan folk dance is very popular in China!

This work is licensed under a Creative Commons Attribution-Noncommercial-No Derivative Works 3.0 United States License.
Posted by Katley at 11:48 AM