Music for the Birds! 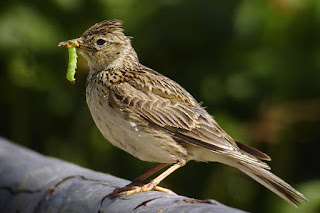 In a broader sense, the rhythms of nature, large and small - the sounds of wind and water, the sounds of birds and insects - must inevitably find their analogues in music.
George Crumb

If you like music for the birds, you have come to the right place.  If English is not your native language "for the birds" is an idiom meaning worthless.  If you read today's post and listen to the music, you'll find it definitely worth your time.

Today's post focuses on a very popular tune from Romania, Ciocârlia (Skylark). It was a piece originally composed by Anghelus Dinicu for the pan flute (nai), and arranged  for violin by his grandson Grigoraş Ionică Dinicu.

Pan flutes, or panpipes are common to other countries as well as Romania.  It is also a folk instrument played in the Andean regions of South America. However, Romanian musicians developed such proficiency on this instrument that they made it sound birdlike.  This is why Ciocârlia is so popular with pan flute players.

The performer below is a virtuoso on this instrument.  He really gets that bird song on.

The second video is a bit longer than the first, and the soloist is accompanied by a band (violinist, pan flute, cello, cimbalom, accordion, saxophone and several violinists).  Although this performance is over 20 years old it's worth a listen.  This group sounds just like a flock of birds.  Seriously, it sounds like a summer morning when the birds go mad with their chirping. It is amazing how creative these guys are.

The Cimbalom/Tambal in Romanian Folk Music

It's almost winter and cold enough for snow and ice, in many places (unless global warming has cancelled winter for this year) Check out some variations of Hora pe Gheata.

This work is licensed under a Creative Commons Attribution-Noncommercial-No Derivative Works 3.0 United States License.
Posted by Katley at 10:37 PM