A Cat and a Dream 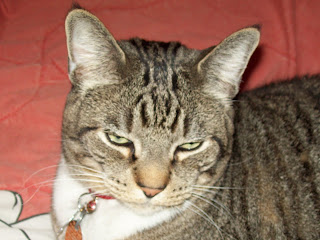 Fatso is my almost twelve year old tabby, and he's a big boy, weighing in at 22 pounds. He was born on April 20, 1998. My family adopted him from a shelter and he's been with us ever since. Although we've done everything we could to slim him down, it's an exercise in futility. He loves his food too much. His sun sign is Taurus, and they love to eat.
Although I don't speak Felinese, and he doesn't speak English, we understand each other very well. We share quality time listening to music.
He had a dream not long ago, and in it he tells the story of a visit to the town of Gabrovo, Bulgaria, to take part in their carnival parade.
The symbol of the town is a cat with its tail cut off. The story goes that the people of Gabrovo cut the tails off their cats to save money on heat. Here is some Gabrovo humor from the House of Humor and Satire's web site, including a picture of a mouse with a pair of scissors, cutting the cat's tail.....
http://www.humorhouse.bg/engl/gbhumour.html
Fatso actually lost a piece of his tail to the surgeon's knife years ago when he tried to sneak out the porch door. His tail was fractured and became infected, necessitating the removal. He gets bored sometimes and is jealous of the other kitties who freely roam the neighborhood. I keep him in the house, having seen too many felines who have become road kill. This is probably why he gets bored and eats all the time. He has made multiple escape attempts.
He likes it when I play Bulgarian folk music, and often sits on the chair by the computer. The music, combined with the tapping of my fingers on the keyboard, is what lulls him to sleep. It gives him a feeling of security, most of the time :)
Here is his story. It's called The Brotherhood.
http://www.helium.com/items/1726571-a-cats-dream
Posted by Katley at 6:04 PM