To Greece and Bulgaria and back....in one weekend! 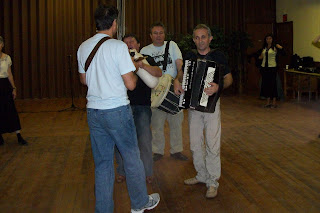 It was a "beautiful day in the neighborhood" for Balkan music and dance. There was a Greek festival and a Bulgarian band performance within a 30 mile distance from each other. Seldom do such enjoyable events happen in the same weekend :)

First was the annual Glendi, a celebration of Greek culture, food, music, and dance. The St. George Greek Orthodox Church hosts a three day festival every year on the second weekend of September. It draws people from miles around, and the biggest attractions are the food and the costumed folk dancers. Saturday, especially drew a huge crowd; parking was difficult to come by, and from what I was told they ran out of food sometime Sunday afternoon.

Here are several videos of the church's youth group performing on Saturday night:

The next video is of a Pentozali, a dance from Crete. The prefix "pento" means five, which means it has five basic steps. The Greeks contributed much to our knowledge of math, especially geometry (a pentagon is a five-sided figure.) Balkan dancing tends to appeal to math-minded people, as I mentioned in a previous post: http://katleyplanetbg.blogspot.com/2010/06/balkan-folk-dancing-and-its.html

This is a dance called Tsamikos, which goes three steps to the right, and one to the left, a very common pattern in folk dances.

Now it's time for some music from Bulgaria, performed by Kabile. They are a band from the Bulgarian region of Thrace (there is a Thrace in Greece, too!) and have been playing together since 1980. When the band members were all living in Bulgaria, they played at weddings and other celebratory events.

Two of the members, a husband and wife, emigrated to the United States 15 years ago, and now live in New York City. Every so often, they have a reunion tour. I was at their final 2008 performance in the States, which was at Mt. Holyoke College.

And here is Sunday night's performance of a beautiful lesnoto. In musical notation it has the same time signature as rachenitsa but the accents are different, the rhythm being "galloping, apple, apple." The time signature is 7/8. Notice the band performing in the center of the circle instead of on the stage. It draws its energy from the dancers and vice versa, this is done at village dances in the Balkans.

The final video is a dance from the Thracian region of Bulgaria. It's called "Trite Puti" which means three times. The Greek fascination with math must have traveled to Bulgaria, too :)

This work is licensed under a Creative Commons Attribution-Noncommercial-No Derivative Works 3.0 United States License.
Posted by Katley at 8:54 PM