The Gadulka in Bulgarian Folk Music: Another Instrument of Torture Heard From (fifth in a series) 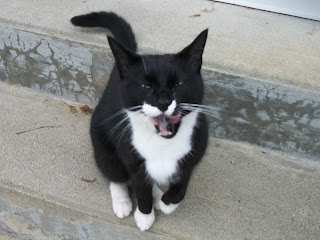 photo by KDB of "Oreo"

"The gadulka just isn’t meant to bring happiness to modern people." Rayko Baychev, from The Gadulka is Burning

You're probably wondering...why is there a picture of a cat here? Read on, you will find the answer later.

This is a musical intrument most people (except for Bulgarians) know little about, and some would consider it an instrument of torture like the bagpipe (gaida) or the accordion. People either love it or hate it. I describe it as a fiddle with attitude.

To get a sense of what a gadulka is about, first read this article from Wikipedia.

Now it's time to hear what a gadulka sounds like when played by a virtuoso. This is a solo performance by Nicolai Kolev. The piece is a rachenitsa, a Bulgarian folk dance in 7/8 time (apple-apple-pineapple).

Here is another piece with some beautiful scenery in the background...a gadulka serenade, how romantic :)

The gadulka is an integral part of the Bulgarian folk ensemble, and not usually featured as a solo instrument. It gets lonely all by itself, and prefers plenty of company. One of my favorite bands, Kabile, plays Bulgarian wedding music, and they go on tour in the United States every couple of years. I have danced to their music on several occasions, and they are one of the best groups around! In this video the gadulka is accompanied by its friends the gaida (bagpipe), accordion, clarinet, tupan, (drum), kaval (flute) and of course a singer! Synergy at its finest :)

A little gadulka humor is in order. This link goes to a memoir (in English translation) by a Bulgarian musician and gadulka player, Rayko Baychev. You will especially enjoy his description of how the Bulgarian folk orchestras use dead animals (cats, goats and pigs) to make music. Don't worry, it's funny, not gory. This is some excellent writing, enjoy!

The Bagpipe and Bulgarian Folk Music

The Clarinet in Bulgarian Folk Music

This work is licensed under a Creative Commons Attribution-Noncommercial-No Derivative Works 3.0 United States License.
Posted by Katley at 9:23 AM