The Tambura in Macedonian, Bulgarian and Croatian Folk Music 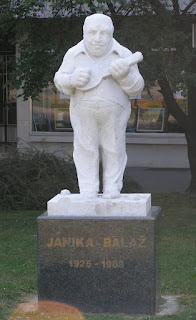 This week's post is about another musical instrument popular in the Balkans, the tambura. According to Wikipedia, it is "a long-necked metal-strung fretted lute used for rhythmic accompaniment as well as melodic solos." Some may view it as an instrument of torture much like the accordion or the bagpipe (gaida), which are also traditional Balkan folk instruments. This is the kind of music people either love or hate, there is no middle ground.

The first video is of a of a musician playing a Macedonian dance tune, Tropnalo Oro, on a solo tambura.

This link explains the Macedonian folk instruments, including the tambura, along with pictures.

The next tambura piece comes from the Pirin region of Bulgaria. The first part of it is a rachenitsa, a Bulgarian folk dance in 7/8 time. Tambura music is very popular in the Pirin, probably because southwestern Bulgaria shares a border with the Republic of Macedonia, and music does not recognize national boundaries.

Now we travel further west, to a country which used to be a part of Yugoslavia, Croatia. Tamburitza orchestras are quite common in Croatia, and an integral part of this country's folk music. Tamburitza is another name for a tambura; in Croatia they come in a variety of sizes and shapes. The ensembles that play tamburitza music have a distinctive sound, and there's no mistaking them for anything else! This group is from Chicago, USA and they sing as well as play!

If you're interested in the instruments that make up a tamburitza orchestra, check out this page from Wikipedia.

The last video in this post is an excerpt from a folk opera, Ero the Joker by Croatian composer Jakov Gotovac. Although Gotovac was primarily a composer and conductor of classical music, Ero s onoga svijeta is a work based on folklore. The finale, Završno Kolo, is done in true Croatian style, and played by a tamburitza orchestra accompanied by an accordion. The music and dancing here are a treat for the eyes and ears.

Check out the gadulka, a folk instrument very popular in Bulgaria. This post is funny as well as informative.

This work is licensed under a Creative Commons Attribution-Noncommercial-No Derivative Works 3.0 United States License.
Posted by Katley at 4:45 PM