More Odds and Ends: Misconceptions About the Cyrillic Alphabet, Bagpipes, and Bulgarian Geography 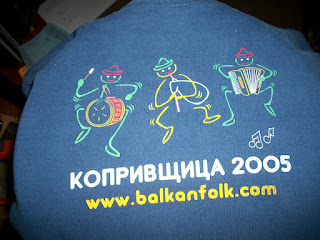 This old T-shirt, which reads "Koprishvitsa 2005" was one of the first items I received in the mail from Bulgaria, along with a CD of songs by Kostadine Gugov. (I have never been to the Koprishvitsa festival, which is one of the places on my bucket list.) I got it back in the days when the website, http://balkanfolk.com/ gave a monthly prize in a drawing that the site used to have. In order to enter it, you had to vote on your favorite Bulgarian folk song.

The Cyrillic lettering aroused my daughter's curiosity, since she had taken Russian in elementary school. So she asked me:

"Is that the Russian alphabet?"

I explained to her that it wasn't Russian but Bulgarian.

"It's the Cyrillic alphabet. It's used both in Bulgaria and Russia." (there are other countries that use it too, but I wasn't going to get into that.)

"Oh." She had a bemused and confused look on her face. She still didn't get it. So much for explaining азбука (azbuka) to my daughter.

From what I've seen Americans don't see much of the Cyrillic alphabet except in old spy movies which took place in the former Soviet Union, which is why they automatically associate Cyrillic with Russian.

People are often surprised when they first hear Bulgarian folk music played on the bagpipe. In the States, bagpipes are associated with Scotland, men wearing kilts, parades, and sometimes funerals.

In this commercial, men play a Bulgarian folk tune on Scottish bagpipes. This is a cleverly crafted ad for rakia (brandy).
,


The Bulgarian bagpipe (gaida) is a totally different species from the Scottish. It's made from the stomach of a goat or sheep which gives it a distinctive sound. Although Scots have been known to dance to bagpipe music, Bulgarians sing as well as dance along to it. In this case it's the entire village, and there's a surprising display of firepower near the end.

Another question I've been asked is if Bulgaria has a seacost. Americans, in general, know little of European geography unless they've actually traveled around the Continent.

I lived in Germany for four years, so ignorance of geography was not an option, especially when guiding my husband with the map (yes, we actually used those in the days before the GPS!) And we did sometimes get lost!

Bulgaria not only has a seacoast, it is a very popular vacation spot for Western Europeans, especially those from cooler, rainier climes like Germany and Holland. The North Sea is too cold (even in summer) and the main attraction of the Black Sea towns, so I've been told, is the endless party, especially for the under 30 crowd. Then of course, there's the beach.

Judging from the travel ads I've received in the mail, Bulgaria is not a very popular tourist destination in the United States (except for people involved in folk music, who see visiting this country as a pilgrimage of sorts.) Friends of mine who actually been there have told me their visit was religious experience of the musical kind, especially that aforementioned Koprishvitsa festival.

The problem with a tourist destination becoming popular is that it loses the local flavor. I'm for traveling off the beaten path, which I was able to do when I lived in Germany; living in a foreign country is a lot different than visiting during a short vacation.

Maybe it's a good thing Bulgaria isn't infested with tourists from the United States :) Otherwise the entire country would resemble Sunny Beach.

The Cyrillic Alphabet: Cracking the Code (have you ever wondered is there is such as thing as Cyrillic alphabet soup?

This work is licensed under a Creative Commons Attribution-Noncommercial-No Derivative Works 3.0 United States License.
Posted by Katley at 8:21 PM