The River of Many Names Part 6:The Danube in Croatian Folk Songs 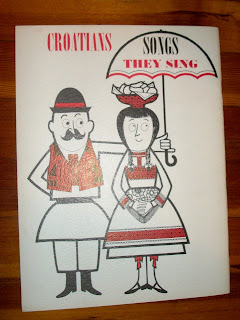 You're probably asking "Why does this post begin with a picture of a vintage Croatian songbook, and will there be videos of any of the songs in it?"

A friend of mine, who knows of my interest in Balkan music, sent the book to me last year. He has mailed me all kinds of cool stuff including a CD of gadulka music played by Nikolai Kolev. I can always count on him for surprises in the mail.  He keeps the United States Postal Service busy, and that is also a good thing.

The book itself was published by the Duquense University Tamburitzans Institute of Folk Arts in the year 1975. It has about 30 pages of songs with sheet music, with the lyrics in Croatian and in English translation.

The Duquense University Tamburitzans, one of the longest running traveling folklore shows in the United States and Canada began as a tamburitza ensemble.

When Croatian people emigrated to the New World they became homesick, so they found solace in their folk music. They formed tamburitza ensembles all over the United States and Canada and performed at weddings and church festivals.. Tamburitza music found an audience even among non-Croatians like myself. International folk dance groups loved it and included it in their repertoire.

Today's songs have several things in common: they are all from Croatia.  They are either about or mention the Danube (River of Many Names a.k.a. Dunav), and the singers are accompanied by tamburitza orchestras.  None of the songs came from the book in the picture above, but go ahead and listen  anyway, you will enjoy them (although I know a few people who think this is music from Hell).

The first group, Dunavski Tamburaši (the ensemble is named after the river) performs the song Na salašu pokraj Dunava (On a Farm Near the Danube.)  I could not find the lyrics for this anywhere either in the original language or in translation.

This catchy tune, U selu pokraj Dunava,  (In a village near the Danube), describes a man in love with the dark-eyed girl who lives in the village. The eyes seem to have it in the Balkans. Listen to it once and it's guaranteed to take up residence inside your head for hours. There is a term for songs like these; they are called earworms, although I happen to like this one.

You can sing along with the original Croatian lyrics here.

Croatia used to be a part of the multi-ethnic multi-cultural nation of Yugoslavia, which, surprisingly, stayed together for nearly fifty years. Yugoslavia broke up after the fall of Berlin Wall in 1989 and became like Humpty Dumpty. Once it fell apart, it never got back together. Croatia declared independence in 1991; it has been its own entity ever since.

The Danube town of Vukovar has had a violent history. It was bombed by Allied forces during World War II  and by the Yugoslav army during the Croatian War for Independence in 1991. Vukovar was almost completely destroyed both times. Land mines still exist in the area, and there are numerous reminders that a war took place here not so long ago.  This picture from an old German postcard depicts a more peaceful time.

In the video you can see present day Vukovar accompanied by a song about the city. Although most of it has been rebuilt, evidence of the war is still visible.  At 0:54, there is a building pockmarked with bullet holes; and at 2:02 you can see the the bombed out water tower, which has become a symbol of the city's suffering. The Danube scenes start at 1:37, and at 2:05 you can see a cross which was built as a memorial to those who died during the Croatian War of Independence.

This is a rough translation of the refrain. Google Translate does not do well with Croatian.

Vukovar, Vukovar, stands proudly by the Danube, burning in defense of Croatia .

And finally, here is my two cents' worth on the subject of war. War is something difficult to justify, especially the ethnic and religious kind which has been the scourge of Balkans.  This quote by Albert Pike sums it all:

War is a series of catastrophes which result in victory.

If you enjoyed this you may also enjoy The River of Many Names Part 5 (the links for the previous posts 1,2,3 and 4 are embedded in part 5). The series includes music from Serbia, Bulgaria and Romania.

Last year I saw a performance of the Duquense University Tamburitzans. If they come to your neighborhood, go check out the show, it will be the best two hours you've ever spent.

This work is licensed under a Creative Commons Attribution-Noncommercial-No Derivative Works 3.0 United States License.
Posted by Katley at 11:24 PM