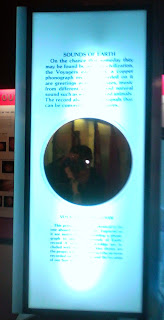 Somewhere, something incredible is waiting to be known.
Carl Sagan

The exhibit (see photo above) is a copy of the Golden Record sent up into space on the Voyager in 1977 for the purpose of contacting intelligent life somewhere in the universe.

The hauntingly beautiful song Izlel e Delio Haidutin was on on that record, along with many other sounds from Planet Earth.

The large bagpipe is a kaba gaida, used as accompaniment for folk songs from the Rhodope region of Bulgaria.

Although Izlel e Delyu Haidutin is Valya Balkanska's  most popular song, there are many others in her repertoire. You can sample some of them in today's post.

The next two videos were part of a Bulgaria Liberation Day concert that took place in Toronto, Canada. It featured Valya Balkanska and Peter Yanev (on kaba gaida).

In the first video the audience dances a very long Pravo Horo. Afterwards the song Izlel e Delio Haidutin starts at 10:22 and goes into the next video. The person who recorded this performance had to do it in installments, which is a bit of a distraction.

Video #2  is a continuation of the first (on YouTube they are listed as 8 and 9).  After a short speech in Bulgarian, there is more singing and dancing at 2:55. The video concludes with the song  Tih bjal Dunav se valnuva, (also known as the Botev March) which commemorates Hristo Botev's historic crossing of the Danube from Romania to Bulgaria during the April Uprising of 1876. The lyrics are based on a poem by Ivan Vazov.

The other installments from this concert are on You Tube, for your watching and listening pleasure.

The Bagpipe in Bulgarian Folk Music

This work is licensed under a Creative Commons Attribution-Noncommercial-No Derivative Works 3.0 ommUnited States License.
Posted by Katley at 9:54 PM