The nearer the dawn the darker the night.
Henry Wadsworth Longfellow

I was at a Greek festival recently. One of the performing groups danced a Hasapiko. I didn't capture it on video because I ran out of space on my phone; but I did manage to take a picture of the dancers. 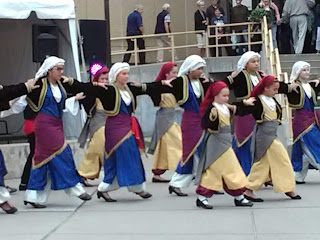 Hasapiko  was originally a dance performed by the butcher's guild in Greece.  The more modern form is also known as Sirtaki.

On the Universe of YouTube I found a superb rendition of Hasapiko performed by a couple to the beautiful song I Fili Mou Haramata (My Friends At The Break Of Dawn). The song blended so well with the dance that I had to share it.

The song itself is about a woman who wants to hide from everyone, including her friends, because of a relationship breakup.  They gather at her house at dawn, happy, with drinks in their hands.  She isn't having any of it.

The Butcher's Dance in Balkan Folklore

This work is licensed under a Creative Commons Attribution-Noncommercial-No Derivative Works 3.0 United States License.
Posted by Katley at 9:23 PM