Folklore, Food and Fun at Festivals 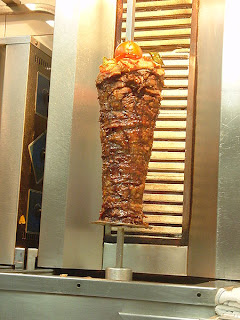 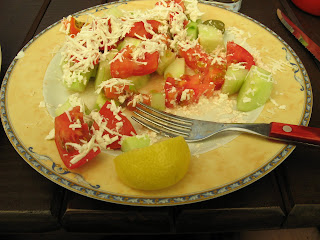 My introduction to Balkan cuisine was many years ago, in the small German town of Kastellaun. http://kastellaun.de/

My husband and I lived in this quaint little town for nearly four years. There were several restaurants that we frequented, but my favorite was the Balkan Grill. We often ate there with another couple, and the proprietor, Victor, always made us feel like family. He came from Croatia, which back in the day was a part of Yugoslavia.

The best thing on the menu was the Grillteller a la Fritz, a selection of grilled meats which included: ražnjići, which was meat on a skewer; a pork chop, ćevapčići (seasoned ground meat rolled into sausage shapes) served with salad and rice. It was delicious, especially when washed down with some excellent German beer. Oftentimes Viktor treated us to Croatian schnaps. My favorite was Birnenschnaps (made with pears). On cold evenings, he'd pour us each a shot of slivovitz and our international group (two Americans, a Brit, a German, and a Croatian) toasted each other in several different languages. By the end of the evening we staggered home, full from the delicious food and more than a little giddy from the alcohol.

Ever since, I've loved food from the Balkans. One thing that I've noticed is although the foods are similar from country to country, the names, and sometimes the recipes are different. For example: what people in Croatia call ćevapčići is known as kebapcheta in Bulgaria. Souvlaki is the Greek name for shish-kebab, which is called ražnjići in Croatia and Serbia.

Here in the States, I frequent ethnic festivals. Since traveling abroad is out of the question for me in this point in my life, the festivals are the next best thing. The most authentic festivals are those given by the ethnic groups who hadn't been here too long, or who have strong ties with the old country.

Here's a video from a Greek festival I went to last year, and the food and music at this one is top notch. The spanokopita (spinach pie) is to die for, and the desserts are fantastic, especially the home made baklava. (see picture #3 above). People come from miles around to buy food and desserts, and they have sometimes run out before the festival ended!

Balkan cuisine is heavy on the meat, especially lamb, which is usually cooked whole or on skewers, which most people know as shish-kebab. Lamb is sometimes prepared on a vertical rotisserie, sliced, served with yogurt sauce, lettuce and tomato on a pita, the Greeks call this a "gyro." (see picture #1)

Grape leaves stuffed with rice or meat are a common side dish at the festivals as well as various salads. The Greeks call them "dolmadakia."

Speaking of salads, the Shopska Salad is a very simple, and tasty side dish, made with cucumber, tomato, onion, and brined cheese (similar to the Greek feta), and vinegar and oil dressing. (see picture #2) I had one at an festival featuring the band Zlatne Uste, which was multinational in that it took place at the Hungarian House in New York, and the catering was done by Bulgarians. There was roast lamb, banitsa (made with fillo dough and cheese), stuffed grape leaves, the aforementioned Shopska Salad, and baklava, among other delicious foods.

Are you hungry yet? If not, you should be!

There's a Bulgarian folk band from the Washington DC area, "Lyuti Chushki" (hot peppers.) The name may have something to do with a concoction of peppers, tomatoes and oil, called liutenitza, used as a relish in Bulgarian cuisine. http://www.omda.bg/engl/cook/liutenitza_engl.htm

Here's some spicy music, played by Lyuti Chushki. It's a little hard to see, but the dancers are doing Pajduško horo. The group's signature song is at the end of the video.

This work is licensed under a Creative Commons Attribution-Noncommercial-No Derivative Works 3.0 United States License.
Posted by Katley at 6:22 PM