Last week when I went to the Kabile event at Mount Holyoke, a young Bulgarian student asked me if I belonged to a dance club. She remarked that Americans knew the Bulgarian dances better than they did!

I described our group, which meets in the town of Amherst. There are five colleges in this area. Students from all over the world attend school here.

I explained to the young woman that our group meets on Friday nights and that we do dances from all over the world, with an emphasis on the Balkans.

She mentioned that she and her boyfriend go to a Salsa class on Friday nights. Was there another Balkan group nearby that met on a different night?

I told her that the only other group, which met on Sundays, was over an hour away.

On the Universe of YouTube, I have noticed that Bulgarians love Latin music. There must be something in it that speaks to them, just like the Bulgarian music speaks to me, a descendant of Puerto Ricans.

Here is a Bulgarian couple dancing salsa to rachenitsa music. Now this is an interesting combination :)

These two young Bulgarians are excellent dancers. They really have a feel for Latin rhythms. (I think this dance is a cumbia from Colombia).

It's time for a cultural exchange between Bulgaria and Latin America. We have a lot to learn from each other :)

For more on the Bulgarian and Latin American connection read:
http://katleyplanetbg.blogspot.com/2010/05/puerto-rico-and-bulgariaa-cross.html

This work is licensed under a Creative Commons Attribution-Noncommercial-No Derivative Works 3.0 United States License.
Posted by Katley at 10:34 PM No comments:

An Unforgettable Evening with Kabile at Mt. Holyoke 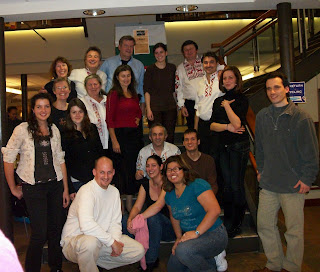 On the 18th of November, Kabile made its second apprearance at Mt. Holyoke College. The first appearance was in November 2008. I was at both events, and both were fantastic. You can read about the band here:
http://humboldtfolkdancers.org/kabile.html

Back in September they performed in Wethersfield, CT for the Always on Sunday folk dance group. I was at this event as well, and here is the recap:

The great thing about Mt. Holyoke is that it has a sizable number of international students and an active Bulgarian Club that organizes events on campus, which they share with the community. So far they have had sponsored two wonderful events this year: Lyuti Chushki and Kabile. For more about the Bulgarian Club, visit their webpage:
http://www.mtholyoke.edu/org/bulgarian/

Lyuti Chushki performed at Mt. Holyoke back in March of this year. This was another dynamic event with workshops during the day and a dance party in the evening. Click here to read about it: http://katleyplanetbg.blogspot.com/2010/03/visit-to-bulgaria-by-way-of-mt-holyoke.html

And finally here are some videos from the second Kabile performance at Mount Holyoke. Part one was a concert on stage; part two was a dance party.

Two members of the band perform Trite Puti on a gaida accompanied by a tupan. This was part of the concert before the dancing. Trite Puti is a dance from the Thracian region of Bulgaria, where the band is from.

A rachenitsa (the national dance of Bulgaria) performed on a gadulka, a traditional folk instrument:

When the musicians play in the center of the circle, the energy gets transferred to the dancers. The dance is Daichovo Horo.

A slow pravo gives the dancers time to catch their breath. The song is Devoiko Mari Hubava.

I would like to thank the Bulgarian Club for making this all possible and Kabile for an unforgettable evening of music and dancing. By the way, the banitsa at the snack table was delicious!

A Dance by Any Other Name...

Today's topic is a dance by any other name.

Many Balkan dance names originate from a town or region, such as the Macedonian dance Bansko (named after a town), or Eleno Mome from Bulgaria (named after a person). The Greek Hasapiko is a butcher's dance and has counterparts in Macedonia and Bulgaria where it's called Kasapsko. There's even a Serbian dance named after the Orient Express, the train that once traveled through central Serbia in its heyday, on its way to Istanbul. By the way this one is very popular in the United States, and was one of the first dances I learned :)

The following dances have not been given a name aside from the generic term "folk dance." Here are three examples from three different Balkan countries.

The first one, Narodno Horo, is from Bulgaria. There are several dances combined here; Dunavsko Horo and Chichovo Horo. There's a third one in here, but I don't know the name, so I call it the swishy-swishy grapevine dance.

The Macedonians, not to be outdone, have their own version, Narodno Oro. This performance is by a group on California. A Macedonian who saw this on the Universe of YouTube commented he was delighted to see Americans dancing to Macedonian music, however, he mentioned that they do it somewhat differently at home.

Narodno Kolo is the Serbian version. Kolo means wheel or circle in Serbian. It's a bunch of people dancing in a circle. Notice the large display ad for a brand of bottled water and the number of women wearing high heels and pointy shoes. With all the jiggling of a certain part of the female anatomy, the marketing of sports bras instead of bottled water in hourglass shaped bottles might be a better choice. Or could it be that Moja Voda has the side effect of enlarging a woman's mammary glands? Sure looks like it here.

This work is licensed under a Creative Commons Attribution-Noncommercial-No Derivative Works 3.0 United States License.
Posted by Katley at 9:20 AM No comments:

Today's topic is Bulgarian Folklore in Pop Culture. It has a way of sneaking up on you when you least expect it.

Video #1 of consists of several excerpts from a chick flick...(you know the kind of movie that women love and guys love to hate). The movie is The Prince and Me 3. After I read the synopsis, I noticed it was set in an imaginary country called Belavia. Those of us who know and love Bulgarian folklore were not so easily fooled. The dance sequences were probably the best part of the film.

I have never seen an octopus dance. With the number of legs they have, it would probably be a difficult feat at best. Here is a delightful blend of folklore and pop culture in a song about the prophecies of Paul the Octopus during this past summer's World Cup. It's called the Oktopod Rachenitsa.

Paul lived in an aquarium in Germany and his claim to fame was picking the winning teams that the Germans played against at the 2010 World Cup. German soccer fans went ballistic when Paul picked Spain as the winner in the final; they were ready to sentence him to death by frying.

Fortunately for Paul, his life was spared, and he died of natural causes in late October. On a clear night you can see him in the Great Celestial Ocean as the constellation Pulpo, where, rumor has it, there is a possibility of extraterrestrial life. Don't be surprised if you meet an alien who looks like an octopus one of these days, he is probably one of Paul's friends :)

The song Sadi Moma is about a girl who plants grapevines, and a young soldier who gets drunk from too much wine. The one who plants the grapevine is the one who rules the world :) There is also a dance done to this song.

Someone out there was feeling a little creative (probably after several glasses of wine) and used the music to write a little ditty about free software.

This work is licensed under a Creative Commons Attribution-Noncommercial-No Derivative Works 3.0 United States License.
Posted by Katley at 11:34 AM No comments:

The "Flavors" of Bulgarian Horo and the Diversity of the Different Folklore Regions, Part 2

The Rhodope region, in southern Bulgaria, which shares the border with Greece, has a relatively sedate style in comparison, as you can see in this performance of Svornato Horo. The music tends to be a bit heavy on the bagpipe (gaida).

Dances from the Pirin region are very similar to those of neighboring Macedonia. They are characterized by leg lifts, hands held in a "w" hold, and the music speeds up as the dance progresses. The Pirin people love the gaida almost as much as the people of the Rhodopes. This dance is called Arap.

As a contrast, here's a non traditional version of Arap, performed by the group Rakiya, from the Boston area, during Balkan Music Night this past March. The song, Zaiko, is about a rabbit who barely escapes the hunters....

You can read more about Balkan Music Night, a yearly event in the Boston area, here:
http://katleyplanetbg.blogspot.com/2010/03/march-madness-balkan-style.html

The most well-known dance from the Shope region is Jove Malej Mome. What's unique about is that it's the combination of two assymetrical rhythms, 11/16 plus a 7/16. If music theory's not your thing, there's a much easier way to get the rhythm down. Clap this to the music: Slow-Quick-Quick-Quick-Quick-Slow-Quick-Quick.

Dances from the Shoppe region (near Sofia) usually consist of extremely fast and complex footwork with the use of belt holds. If one person screws it up it's like knocking down a line of dominoes :) Jove Malej Mome is relatively easy.

By the way, if this blog has whetted your appetite for Balkan music and dance, check out my YouTube channel.

This work is licensed under a Creative Commons Attribution-Noncommercial-No Derivative Works 3.0 United States License.
Posted by Katley at 9:59 AM No comments: