Everything You Always Wanted to Know About the Martenitsa (but were afraid to ask :) 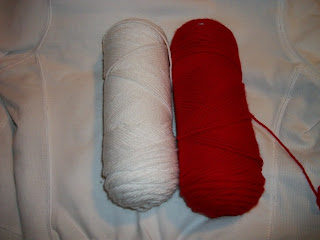 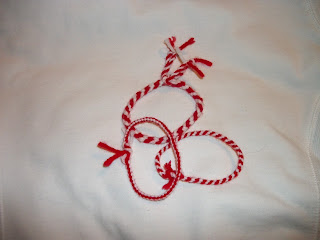 What's red and white and has travelled all over the world? What do Bulgarians wear every year on March 1st to hasten the arrival of spring? Why is it important to make Baba Marta happy? (She's prone to mood swings). It's all in this video.

The custom of wearing the Martenitsa has become widespread outside Bulgaria, and non-Bulgarians, including myself, are wearing them in the hope that Baba Marta (Grandmother Martha) will bring an early spring, since this past winter has been especially cold and snowy. I saw a number of people wearing them at last year's Balkan Music Night, an event held in the Boston area in mid-March. The bands had them on their instruments, especially on their tupans (large double-sided drums).

There is no "right" way to make a martenitsa. They are an exercise in creativity. They come in red and white tassels, tied together. They can be made as bracelets or necklaces, ornamented with beads, or in the form of boy and girl dolls named Pizho and Penda.

I prefer to make the martenitsa as a bracelet, and I can do one in about 15 minutes. The custom is to give them as gifts to friends and relatives, for good luck and good health. One lady, at the Friday night dances, a native of Bulgaria, was quite impressed with the ones I made. She told me in Bulgaria nowadays, people are more likely to buy them from street vendors than to make their own. They are not difficult to create if you've been to summer camp, and I made the ones in the picture #2.

Making lanyards was an activity we engaged in on rainy days at camp and making a martenitsa is just like making a lanyard, except that you use red and white yarn, instead of that plastic lace used to make keychains. The colors, ideally, match the skeins of yarn in picture #1.

The Martenitsa has even travelled to the coldest place on Earth. Handmade ones have been mailed to Antarctica, according to this article from the Bulgarian National Radio.

The Bulgarian Antarctic Institute has a really cool website, and it looks like the people stationed there have been teaching the penguins to dance :) Wherever Bulgarians go, they take their traditions with them!

I grew up in the South Bronx, in a housing project. It was a rough neighborhood, and nowadays is one of the most gang-infested places in the United States. These dreary look-alike apartment complexes have counterparts in Eastern Europe, and this neighborhood is the setting for a pair of dueling Martenitsas. Note: Neither one was harmed in the taking of this video, which was done strictly in the spirit of fun.)

For more about the Martenitsa in Bulgarian folk tradition, click this link:

This work is licensed under a Creative Commons Attribution-Noncommercial-No Derivative Works 3.0 United States License.
Posted by Katley at 2:22 PM