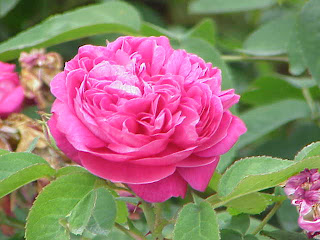 The expression "days of wine and roses" was originally used by Ernest Dawson, a British writer of the 19th century. It's from a stanza in his poem Vitae Summa Brevis:

They are not long, the days of wine and roses:
Out of a misty dream
Our path emerges for a while, then closes
Within a dream.

There was also a movie from the 1960's Days of Wine and Roses, a drama about alcoholism. I don't watch depressing films like these but here's the link if you're interested.

Since The Alien Diaries is about fun, there will be nothing on this blog of a sobering nature. Here the Days of Wine and Roses will be entertaining and enjoyable. You can even drink a toast to me while you read this :)

Wine and roses are popular themes in Balkan folk music, as you will see here.

The first video is of a Bulgarian song set to Greek music. These men are ready for a serious evening of wine and dancing; the song is Give Us Some Wine. Notice the women dancing the Hasapiko, which was originally the dance of the butcher's guild in Greece during the Middle Ages.

For more on the Hasapiko and other butcher's dances from the Balkans read:

The next song is a satirical one from Macedonia, Imate Li Vino. Bring on the wine, the money, and the young women. But you can keep the old ladies!

The lyrics can be found here:

Roses are beautiful flowers, and they are everywhere during late spring and early summer. The rose is the symbol of Bulgaria, and rose oil is a very important export for this country; it's used as an essential ingredient in perfumes. The next song is A Bulgarian Rose. The lyrics are included, so you can sing along :)

The Days of Wine and Roses would not be complete without a short film clip of the Rose Festival which takes place every June in the town of Kazanluk, Bulgaria. The celebration includes dancing Pravo Horo in the town square, it's a simple dance that everyone can do.

This work is licensed under a Creative Commons Attribution-Noncommercial-No Derivative Works 3.0 United States License.
Posted by Katley at 7:48 PM