Blog Action Day 2011: A Look at Peppers in Bulgarian Food and Folk Songs 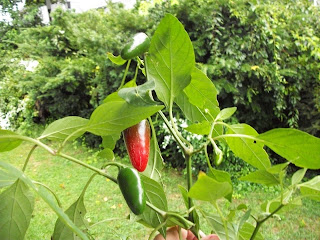 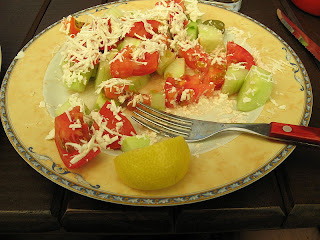 Here's the link to the 2011 Blog Action Day webpage:

In keeping with Blog Action Day, today's post will be about food. Since food is such a general subject I decided to focus on that multinational and multicultural staple, Capsicum, otherwise known as the pepper. They come in many varieties from the sweet bell pepper, the somewhat hotter jalapeño, and then there's the hottest pepper in the world, the ghost chili. Capsaicin is the chemical in hot peppers that makes them spicy. It has medicinal qualities and can be used to treat minor aches and pains. Ironically it's also the same substance that fires up your mouth when you eat a hot pepper.

Peppers are used in a wide variety of cuisines, such as Latin American, Italian, Chinese,and Eastern European. They add flavor and sometimes heat, depending on the type. The milder ones are used in salads, and the hot ones as a garnish, or an ingredient. They are very nutritious. Peppers have Vitamin C and beta carotene, and are a good source of dietary fiber. Did I forget to mention they also taste good?

Bulgarians are quite fond of peppers. They are eaten raw in salads, or stuffed with rice, vegetables and cheese and baked.

One of the key ingredients in the Shopska Salad is red sweet peppers (either raw or roasted). Shopska Salad is very easy to prepare, and the ingredients can be found in any supermarket: sweet red peppers, tomatoes, white brined cheese (similar to the Greek Feta), onions, cucumbers and parsley, mixed with sunflower oil and vinegar. The colors in the Shopska salad are also the colors of the Bulgarian flag.

There is also a relish made from hot peppers, Lyutenitsa, which is usually spread on bread. It is a traditional Bulgarian staple; pepper concoctions similar to this are very popular all over the Balkans, and known under different names with slightly different recipes. There is Serbian ajvar, Romanian Zacuscă, and Turkish Biber salçası.

You can find the recipe for Lyutenitsa here:

Peppers, sweet and hot, are very important in Bulgarian culture, and also in their folk music. Here are some pepper songs from the Universe of YouTube. Although some people in the United States have never heard of Bulgaria (and probably think it's a planet in outer space), Bulgarian traditional music is quite popular among folk dancers in this country (and around the world).

The first song, Dilmano Dilbero, is a lighthearted ditty about a girl planting peppers.

There is a phenomenal group from the Washington, DC area who performs Bulgarian folk music. The name of the band is Lyuti Chushki, which translates to hot peppers in English and their music is quite spicy, kick it up a notch! At the end of the video you can hear their signature song, which is, of course, about hot peppers!

Here is some more music from Lyuti Chushki along with a link to their website.

If you enjoyed this you may also like Folklore, Food and Fun at Festivals:

A cross-cultural post on butchers' dances can be found here:

This work is licensed under a Creative Commons Attribution-Noncommercial-No Derivative Works 3.0 United States License.
Posted by Katley at 6:22 AM