The dance of the week is Ginka, from the southwest (Pirin) region of Bulgaria.


For some reason Ginka is more popular in Bulgaria than it is in the Western Hemisphere, although I found the notes for it on an American folk dance camp website.  It's done to a different song, Mitro le Mitro.

The first video features dancers in elaborate embroidered costumes and they are from the Philip Kutev ensemble. You can find this dance and many more on the website horo.bg  which has videos of dances from all the folklore regions of Bulgaria.Click on the English flag on the upper right hand corner of the website if you're Cyrillically challenged :)

If you're familiar with the song Dobra Nevesto, you'll hear a bit of it at the end (minus the singing).  The rhythm is 7/8 (pineapple-apple-apple).

Ginka #2 is from a Bulgarian dance class; same dance with modern music.

This week's bonus is some gaida (bagpipe) music, since gaida beings with the letter G.  The Chinese New Year starts on February 19th.  It will be the year of the sheep (or the goat, depending on which Chinese Zodiac sign you prefer.)  Both animals share two things in common: they chew their cud and are made into Eastern European bagpipes in the Afterlife.

Someone at the Uncyclopedia got really creative with this gaidasheep. If you enjoy satire, check out a few of their articles. 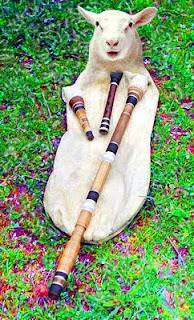 A man from Macedonia who lives in Australia makes bagpipes from the bodies of goats, including the heads. He sells them over the Internet. They are a one-of-a kind product, although some people might be uneasy listening to dance tunes coming from dead goats.

I don't being reincarnated as a gaida is a bad thing. This goat can be happy in the knowledge is that he's creating beautiful music (with the help of Risto Todoroski) for the world to enjoy.

The tune is Pajduško, a dance very popular in Macedonia and Bulgaria.

This work is licensed under a Creative Commons Attribution-Noncommercial-No Derivative Works 3.0 United States License.
Posted by Katley at 6:13 PM