"Music is the strongest form of magic" Balkan Music Night 2012 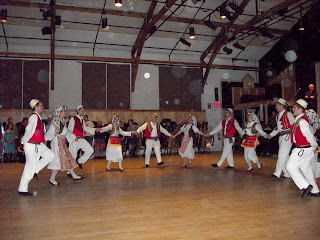 Music is the strongest form of magic.

This quote is attributed to Marilyn Manson, an artist whose music I find really weird. When I first heard of him, I thought he was a woman, after all, how many men do you know with the name Marilyn? (It's actually his stage name; he named himself after Marilyn Monroe and Charles Manson.)

Anyway, this is a quote which perfectly describes Balkan Music Night.

Balkan Music Night, held every year on the third Saturday in March, is an extravaganza featuring music and dance from the Balkans, Turkey and the Middle East. It takes place in the town of Concord, near Boston, Massachusetts.

It begins with a two-hour concert, then the chairs are put away and the hall becomes a venue for a five hour dance party. The upstairs area (which houses a ballet studio) becomes the "Kefana", a more intimate stage for performances by singers and musicians.

The concert this year, in my humble opinion, was a bit of a disappointment because quite a bit of time was devoted to music based on Macedonian folk idioms by the Music Progressive Quartet from Skopje. To me it sounded more like dissonant jazz, and I was hard pressed to find anything folkloric about it except for the rhythm. It just wasn't to my liking, however, it was quite popular with the audience and I'm sure this ensemble will be performing again next year. This video gives a sample of what they're about, the piece is called Dedo (grandfather).

I prefer traditional folk music and by and large, that was what I got during the dance party, with music and performances by the bands Gogofski, Rakiya, Zlatne Uste, and Xopo, just to name a few. Dance ensembles from the Boston area also performed, my favorite group was Ludo Mlado with the Bulgarian suite from the Pirin region, Na Megdena.

The dance party was lots of fun and I came home, very tired, a few hours before dawn.

Here are a few clips from some of the bands who have performed at Balkan Music Night at one time or another. The first one is of Zlatne Uste, a band who has been featured on The Alien Diaries a number of times and the only Balkan Brass Band from the United States to be invited to Serbia to play at the Guča Festival.

The group, Rakiya, with their special brand of electric Balkan music was also featured.

As for the magic in the music, check out this clip, which took place close to midnight. This is the Bulgarian folk dance Daichovo Horo. It is moments like these which make Balkan Music Night worth a visit.

This work is licensed under a Creative Commons Attribution-Noncommercial-No Derivative Works 3.0 United States License.
Posted by Katley at 1:57 PM