Some Fun for April Fool's Day: Silly Songs, Strange Sayings, Proverbs, and Insults from the Balkans 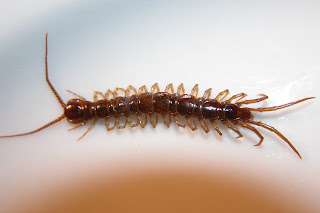 The world lasts because it laughs (motto for the House of Humor and Satire, Gabrovo, Bulgaria)

Warning: The reading of this post may cause uncontrollable laughter. Reader discretion is advised.

Why is there a picture of a centipede on the top of this page? You'll find out later.

If you are looking for creative ways to insult your enemies, here are some really strange put-downs from the Balkans. The first two from Serbia sound like they date back to the NATO bombing of Belgrade back in the 1990's.

May God give you to search for your children with a Geiger counter." (Maybe the Serbs thought those NATO bombs were radioactive?)

Another insult from Serbia: "May your wife give birth to a centipede so you have to work for shoes all your life." (Maybe she had sex with an arthropod. Centipedes are nasty ugly things, so she must have been pretty desperate.....)

If you want to insult a Bulgarian, compare him to a salad.

"You're as ugly as a salad." (Maybe the salad was left out in the sun too long.)

This is one of those Bulgarian "yo' momma" insults:

"Your mother sucks bears in the forest."

Hmmm...this one borders one the obscene. Bear sucking? The whole bear or just a part? Was a vacuum cleaner involved? And is this a male or female bear?

This Bulgarian proverb proves something that I've known all along about men:

"It is easier to fondle lassies, than to cut timbers." Cutting wood isn't much fun, anyway....

The Shope region of Bulgaria is known for humorous and satirical folk songs. Oi Shope Shope, about a young man who's full of himself as well as a know it all, is one of my favorites.

You can find the the song (in German and transliterated Bulgarian) on a page from the Songbook for Nearsighted People. You don't have to be nearsighted to read this book, but the large font is very helpful for those with vision difficulties (actually the book was created so that the musicians and singers could see the lyrics in semi-lit rooms). Rumor has it that some of them also needed reading glasses :)

The House of Humor and Satire in Gabrovo, Bulgaria celebrates its 40th year on April 1, 2012. The symbol of the Humor House is a cat with a part of its tail cut off (so less heat would escape from the house when the cat went out). This cat is also a symbol of the town. It is said that cats in Gabrovo are sent down chimneys to clean them, in order to save money on chimney sweeps.

The link for the House of Humor and Satire can be found here (along with jokes and sayings from the town of Gabrovo):

If you didn't get enough humor today, this Croatian dance will put a smile on your face. Burning dinner is par for the course at my place (my daughter says that the food is done when the smoke detector goes off). The premise of the song is basically this:

The cook burned up a delicious cheese pie
Because the old man gave her the evil eye.

Reminds me of something I wrote for Bad Poetry Night on Facebook :) What's even funnier is that this video involves a male-female role reversal.

For some reason the Songbook for Nearsighted People has the lyrics for Sukačko Kolo in English and German as well as the original Croatian. Read them, they're quite funny :)

If you enjoyed this you may also like A Cat Who Likes the Gaida and the Cat of Gabrovo. Have you ever wondered why critters like music made from the bodies of other animals? I've wondered about that, too.

The Gadulka in Bulgarian Folk Music goes into detail into the "bloodbath" that is Bulgarian folk music. On this post you will find a link to a funny story, written by a Bulgarian musician, on how folk instruments are made.

Sometimes Lost in Translation is a humorous take on Bulgarian proverbs.

This work is licensed under a Creative Commons Attribution-Noncommercial-No Derivative Works 3.0 United States License.
Posted by Katley at 5:53 PM