A Visit to Bulgaria by way of Mt Holyoke College and a little spicy music :) 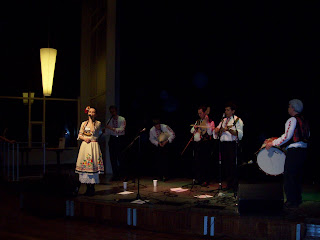 On March 27th, the Bulgarian Club at Mt. Holyoke College hosted several events during their Day of Bulgarian Culture. The picture above is of the band Lyuti Chushki, which means hot peppers in Bulgarian. They certainly lived up to the name!


There were several workshops held during the day. I attended one, and arrived at the tail end of another, which was the the tupan (drumming) workshop. I wish I had left home earlier because the music coming from the room (several people had brought other instruments) was fantastic!


The workshop I went to was an overview of Bulgarian musicology, and the man who presented it had a great sense of humor. It was interesting in that he covered the history of Bulgarian folk and pop music. The two periods he covered were from 1944-1989 (the Communist era) and the post Communist period from 1989-2005.


During the Communist period, folk music and dance ensembles were supported by the State. This was the official folk music of the country. Other types of music such as that played by wedding bands (whose members were of Roma, or Gypsy origin), and pop music, were frowned upon by the regime.


All hell broke loose in 1989, after the fall of the Berlin Wall. With the Communist government deposed came freedom of expression, and a new genre, called Chalga, came on the scene. This was a fusion of pop with folk elements from other countries outside Bulgaria, and lots of videos with scantily clad women singing to computer generated music; their version of MTV! Wikipedia explains this in more detail:

After 1989, traditional Bulgarian folk music became associated with Communism and totalitarian governments. With the lack of government funding, the number of state supported folk ensembles dwindled and only a handful survived. Fortunately a group called "The Mystery of Bulgarian Voices" had their world tour around this time, and popularized this genre outside Bulgaria. People who knew little about Bulgaria fell in love with the music. Here's a performance which took place in the United States, on the Johnny Carson show circa 1990:


Fortunately, Bulgarian folk music has become popular again in its home country. Homesick expatriates were part of the reason, and the international folk dance community has always embraced Bulgarian dances. The younger generation of Bulgarians (born after 1989) are also getting involved in folklore and keeping it alive.

And finally, I took a few videos (see bottom of this post) of the group Lyuti Chushki, who gave a concert, workshop and dance party on Saturday night. This was the grand finale and I danced my feet off, at one point leading a bunch of dance buddies and Bulgarian students in a kopanitsa. The first piece is Pravo Horo, which is one of the most popular dances in Bulgaria. Horo means "chain dance" in English, and it's done in a line or open circle. It is a very basic dance, three steps forward, one step in; then three steps back, one step back. It has variations as well. See video below for a demonstration of the pravo:

The second piece is Dunavsko Horo. This is also a very popular dance, and a pravo variation. It is named after the Danube River, which forms the border between Bulgaria and Romania. There are other versions this piece, the most famous one by Diko Iliev, a Bulgarian composer who lived during the 20th century. Here is the Diko Iliev version, played by a brass band, which is typical of northwestern Bulgarian folk music. The dancers are a university group from Essen, Germany.


The third dance is a kopanitsa. Here is the group Lyush, a Bulgarian folk ensemble from Texas, performing a kopanitsa:

Assymetrical rhythms are common in Bulgarian folk music. Odd time signatures are the norm: 7/8 (rachenitsa and lesnoto), 9/8 (daichovo), and 11/16 (kopanitsa) to name a few. They are a combination of quick and slow beats. For example, the rhythm for rachenitsa, the national dance of Bulgaria, is "apple apple galloping."

For more information on Bulgarian folk dancing and the "flavors" of horo and rachenitsa: