In the Beginning: How I developed an interest in Bulgarian folklore 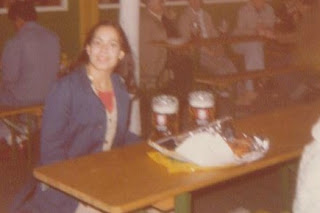 I grew up in New York City, and lived there until my 20's, until I got married and got to do a little traveling.
Growing up in New York, I was exposed to other cultures that were different than my own, however, I did not take up Balkan folk dancing until much later. One reason for this was that I didn't know it even existed! The second reason was that my husband was in the Air Force. At the time we were married, he was stationed in one of the coldest places on Earth (during the winter anyway), which was Minot, North Dakota.
There was no Balkan dancing, or any international folk dancing in Minot. There was, however, a square dance group, the Hicks and Chicks, who met at the base snack bar on Wednesday nights. I worked there several nights a week and watched them when business was slow. I came to the conclusion: square dance is not for me. First of all, I don't like country music, and secondly, I couldn't see myself wearing gingham and petticoats. Check out the square dancers below:
When my husband got orders to Germany I was ecstatic. I had always wanted to go to Europe and have always had a case of itchy feet.
When we lived in Germany, my husband and I visited a number of countries (besides Germany), Austria, Switzerland, Italy, France, Holland, Belgium, and Luxembourg. I really wanted to go to Hungary and some of the Eastern bloc countries, but he was in the Security field, and it would have been extremely difficult hiding that from the Communist officials. So Vienna was as far east as we got.
Since we lived in German wine country, south of Koblenz, we became regulars at the numerous festivals that were held every summer and fall. I became familiar with the folk music of the region and watched a few dance performances at these events.
We also travelled quite a bit in Bavaria, which has a completely different culture than the Rhineland and a very strong folk tradition. This was one of the things that fueled my fascination with folklore.
Another aspect of German, oops, I meant Bavarian culture that I enjoyed were the beer drinking songs and schuhplatter dances. Bavarian folklore, I found was quite cool as you can see from these video clips from YouTube.

On top of this blog entry is a picture of me at the Oktoberfest, Munich circa 1977. No, I did not drink both mugs of beer by myself! By the way, beer at the Oktoberfest is served in one liter mugs (ein Mass, bitte!) The photo is a little fuzzy but that's what happens when you scan old pictures.
Now, inquiring minds may want to know: how does this relate to my interest in Bulgarian and Eastern European folklore and how did I get involved with it in the first place? Turns out I had always had an interest in this subject, since I owned a shortwave radio when I lived in Germany and often tuned in to broadcasts from Radio Budapest, since they played Gypsy (Roma) music, which I enjoyed very much.
Fast forward, mid-1980's. We returned to New York. I was going through a difficult period in my life and happened to see a flyer about folk dancing. It was something I wanted to try but I knew very little about it. A close friend who was also a co-worker, (who died in 1989), steered me to some Balkan folk dance classes which took place in a second story dance studio on Varick Street in Manhattan. I have been hooked ever since.
I had found what I was looking for all those years, and although I love music from the Balkans in general, Bulgarian music and dance satisfied something in my soul. For all I know I may have lived a previous life there. Who knows?
Posted by Katley at 3:01 PM