You Know You are an Alien From Planet Bulgaria when..... 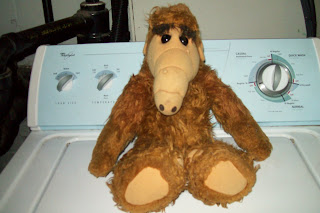 The photo above is that of an Alien Life Form from the Planet Melmac, who has lived in my house for over 20 years, and my son's favorite plaything when he was in preschool. This Alien was on a TV show called "Alf" which was broadcast from 1986-1990 in the United States. His favorite food was cats. Here Alf describes his desire to eat Garfield...too bad he's a giant balloon:

My home is no stranger to aliens, after all, my entire family thinks I am out of this world, and it takes one alien to know another. Alf was one of the coolest aliens on TV. He was a smartass, constantly got in trouble with his human family, and had some really crazy ideas. His family had to hide him from visitors so he wouldn't get abducted by the government, much like my kids tell me to turn down the Bulgarian folk music so the neighbors won't hear it. They're "hiding the alien." From what?


Anyway, here are the signs of a true Bulgarian Alien:


You send to Bulgaria for a folk music CD and wait 8 weeks for it to arrive in the mail. In the meantime, you're anxiously awaiting the arrival of the mailman every day. (I was told later that there was a run on this particular CD in Bulgaria because it was the 110th anniversary of the composer Diko Iliev's birth).

You need your daily folk music broadcast from the Bulgarian National Radio (BNR) on the internet and suffer worse than a drug addict when you can't get your BNR fix. The link to BNR can be found here: http://bnr.bg/sites/en/lifestyle/folklore/Pages/default.aspx


Everything you request at folk dances is from Bulgaria.


You listen to the BNR broadcast in Bulgarian and begin to understand it. (and you never took Bulgarian in school, although your kids took Russian, so that helped a little....)


You know where the region of Dobrudja is located and can point it out on the map. You know tropanka, danets, opas and reka come from Dobrudja. And you can lead these dances in your sleep. Here's Varnenska Tropanka. It's a good way to get your frustrations out because it has lots of stamping.
You write articles about Bulgarian folk dancing. http://www.helium.com/items/1401181-bulgarian-folk-dancing


You have the folklore regions of Bulgaria memorized (they are Pirin, Dobrudja, Shope, Thrace, Strandja, and Severjasko.)


You know the names of different rachenitsa dances and which region in Bulgaria they're from. Here's one from Shope region: >


You know how to make a Martenitsa, and a lady from Bulgaria admires the way you make them.


You know who Tatiana Sarbinska and Valya Balkanska are.


You join http://www.balkanfolk.com/, enter a contest, and get a T-shirt and a CD from Bulgaria unexpectedly in the mail. Talk about making contact :)


You are the only one who doesn't reach for the Advil when the bagpipes are loud, and you actually like bagpipe music.

You can name the instruments in a traditional Bulgarian folk ensemble (gaida, or bagpipe, gadulka (fiddle), kaval (shepherd's flute), tupan (drum), and tambura (lute). And of course, there's often an accordion as well. Here's one of my favorite ensembles, Kabile, who played at Mt. Holyoke college about a year and a half ago:

Here is a video of the dancing afterwards. I was in there somewhere. This is a Pravo Horo, a folk dance popular all over Bulgaria.

I'm sure, when my kids read this, they will tell me I need to get a life :)