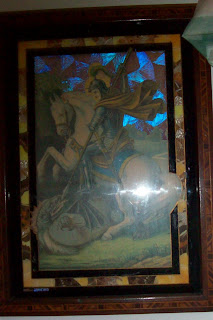 Many years ago, my uncle visited Rio DeJaneiro, and while he was there he picked up this picture of St. George and the dragon. My parents have had this picture hung in a prominent place in their home ever since. It was there long before I was born.

It's possible when my uncle brought this souvenir back from far away Brazil, he was thinking of my grandmother, whose name was Georgina. She was certainly a dragon in her own way. She was extremely religious, to the point of trying to convert nearly everyone she met, she kept a Bible and other religious texts in her bedroom, went to church every day and died at the ripe old age of 91.

For some reason Grandma Georgina didn't like it, and gave it to my parents. The picture both horrified and fascinated me when I was a little girl. I felt sorry for the dragon. When I got older, I found out dragons weren't real, but that people believed in them during the Middle Ages. The picture of St. George and the Dragon shows the triumph of good over evil.

According to legend the dragon spread the plague and breathed fire. He was a threat to the people, so they fed him lambs. When lambs weren't available, he ate children, chosen by lottery. One day the king's daughter was chosen to be given as a bride to the dragon. St. George, seeing the young woman in much distress, offered to slay the dragon, provided the people in the town became baptized as Christians.

Atop a white horse, he killed the dragon, the people of the town accepted Christianity and the threat was no more.

The legend of St. George slaying the dragon is very much alive in folklore, not only in Eastern Europe, but in England as well. The anniversary of St. George's death is a holiday in many countries. The Catholic Church and the Church of England celebrate it on April 23, whereas the Eastern Orthodox Church celebrates it May 6.

Anyway, in Eastern Europe St. George's Day is a day of celebration, and a day off from work. Here are some St.George Day festivities from Bulgaria, with lots of dancing, singing and shouting. They are certainly having a blast!

Here is some background on the holiday from Radio Bulgaria, along with lots of music:


On April 30, I had the opportunity to go to a St. George's Day celebration in New York City. This was a truly international event, since it was held at the Hungarian House, and the bands played Serbian, Bulgarian, Macedonian, and Roma music. The featured band was Zlatne Uste, a very popular Balkan Brass Band in New York City. They have been to Serbia several times, and have even performed in the Guca Festival there! Here is a video from one of their gigs in Manhattan. You can't help but get up and dance while listening to them!

Unfortunately I had to travel light that night, so I didn't bring my camera. Let it be said that the dancing was wild and uninhibited, the music fantastic, the food excellent (the event was catered by Bulgarians, and featured traditional foods such as roast lamb, banitsa and Shopska Salad) and the people, very friendly.

Here is a traditional St. George's Day song from Serbia.

This was one of the songs played at the party, with a lot of loud brass and very strong rhythm. We danced it to cocek (pronounced chochek), which is a very popular dance all over the Balkans, of Roma origin.

This was a night to remember, on a par with Balkan Music Night and Lyuti Chushki's visit to Mt. Holyoke College.

This work is licensed under a Creative Commons Attribution-Noncommercial-No Derivative Works 3.0 United States License.
Posted by Katley at 5:51 PM