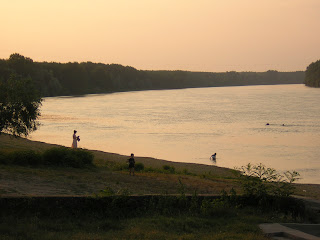 (photo by Preslav, from Wikipedia Commons)

In part 2, we explore the Danube in Bulgarian folk music. By the way the Bulgarians are fascinated by water for some reason I have yet to figure out. One singer even compared water to their folklore. For more on this subject, click here: http://katleyplanetbg.blogspot.com/2010/03/bulgarian-fascination-with-water.html

There are a number of songs and dances written about this legendary river. It is mentioned in the Bulgarian national anthem and frequently in folk songs. The composer Diko Iliev wrote a dance piece, well known and loved in Bulgaria, and played on festive occasions. It's called Dunavsko Horo, and is considered by some to be the second national anthem of Bulgaria:) For more on Diko Iliev, along with some of his delightful music, click the link below:

The lyrics for the Bulgarian national anthem can be found here:
http://en.wikipedia.org/wiki/Bulgarian_national_anthem

Now it's time to check out the Universe of YouTube, where you can find almost everything :) The first video features a folklore group from the city of Vidin. The ensemble is named after the river, which in Bulgarian is called Dunav. You can see them in performing in the first 2 1/2 minutes (the rest is worth looking at as well, with dances from different folklore regions of Bulgaria). By the way this is beautifully done, especially the introduction with the dancers superimposed on the water, accompanied by a kaval solo. That ship behind the dancers is a bit of a distraction, though....

The next video features a folk ensemble performing two dances from northwestern Bulgaria, which borders Serbia and Romania. The first is Krajdunavsko Horo, the second is Dunavsko Daichovo Horo (at 2.04). Daichovo is lively and spirited dance native to this region. It has an odd number in the time signature, which is 9/8. The rhythm is quick quick quick slow, with the accent on the first beat.

I couldn't resist yet another version of Dunavsko Horo, since it's so popular in Bulgaria.

The Danube is often mentioned in love songs. Here is a particularly lovely solo by Nelly Andreeva, accompanied by the Filip Kutev choir. The song, Malka Moma, describes a young girl, praying to God, asking him to help her find a boy she can love. (See English translation below).

And god gave her wings of a falcon.
And she found a boy that she loves."

Radio Bulgaria (BNR) had an article recently about Danube cruises, and also about a bike path along the river from the source to the end. Something I would like to do one day is combine the two. It would be a very interesting journey indeed.

This work is licensed under a Creative Commons Attribution-Noncommercial-No Derivative Works 3.0 United States License.
Posted by Katley at 10:34 PM