On Ethnic Dance and Exercise 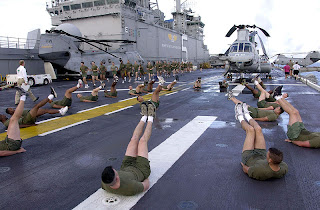 Exercise is good for you, but so many people hate to do it. And they always give excuses. Here are some of them:

"Gym memberships are too expensive."

"I get my exercise walking to the donut shop."

I can understand why many people hate to exercise and have to agree that most physical fitness programs are boring. Who wants to spend an hour or two at the gym at 5 a.m. working out on exercise bikes, treadmills, StairMaster or swimming laps? Not me.

I don't like soccer, basketball or softball, or anything else that involves a ball. Team sports have too many rules, the coaches yell at you when you screw up, and they're not done to music.

I have a problem with the American emphasis on team sports in schools, and the fact that gym classes don't offer alternatives to athletics. A creative teacher in the South Bronx, who was homesick for Ireland, decided to teach Irish step dancing as an after school activity. It went over really big with her students.

It would be nice if more schools offered ethnic dancing as an extracurricular activity or as an alternative to P.E. class. It would be a great solution to the obesity problem plaguing America's kids. I'm sure lots of them would jump at the chance to learn something fun and different, and keep the weight off at the same time!

According to WebMD, in 2009, 63.1% of Americans are either obese or overweight. That's a pretty sad statistic.

Isn't it ironic that a nation with such a large number of obese people loves Dancing With the Stars?

What if they actually got up and danced instead of watching it on TV?

People who dance on a regular basis seldom have to worry about keeping in shape. The aerobic exercise we get after two hours of strenuous dancing is equivalent to about a week of workouts. And it's much more fun than going to the gym.

On Radio Bulgaria's website recently, it was mentioned that only 12% of Bulgarians participate in sports, but I'm under the impression their definition of sports was a little narrow. There was no mention of the folk dance clubs in Bulgaria that meet on a regular basis, to practice, perform and compete. Here's one of them in action on the Universe of YouTube. After I watched this energetic group, I came to the conclusion that dancing is a sport.

According to Dictionary.com, a sport is: "an athletic activity requiring skill or physical prowess and often of a competitive nature, as racing, baseball, tennis, golf, bowling, wrestling, boxing, hunting, fishing, etc."

Why should dancing be considered a sport? It keeps you in shape and it's a social activity, the fact that most of the time it's non-competitive may have something to do with the fact that people don't consider it a sport.

I've noticed that Zumba classes are very popular. Their motto is "Ditch the workout, join the party." The only reason I haven't tried it yet is that it's usually offered early on Saturday mornings. After the Friday night dances, I'm just too exhausted to even watch a Zumba class. It looks like fun, though. Check this out.

Now this Zumba thing is a step (pardon the pun) in the right direction. However, I'm not giving up the Balkan version of aerobics any time soon. Are these dancers having fun yet? You be the judge. Of one thing you can be sure, no grass is growing under their feet!

This work is licensed under a Creative Commons Attribution-Noncommercial-No Derivative Works 3.0 United States License.
Posted by Katley at 3:52 PM