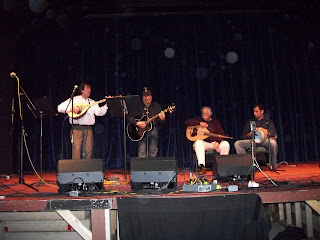 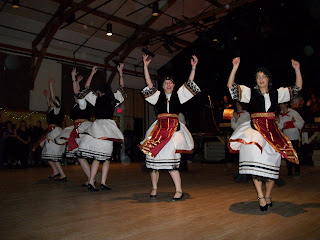 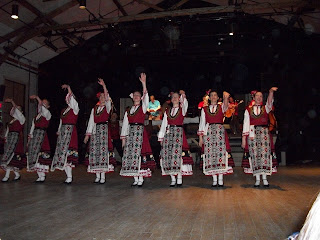 I enjoyed last year's Balkan Music Night so much that I had to go a second time, which I did on March 19, 2011. For me it means an all-nighter, since it's some distance from my home. The actual event lasts from 7 a.m. until 2:30 the next morning. My friend and I are usually wiped out by 1 a.m. and we arrived home very tired, but happy, a couple of hours before sunrise.

For this year's coverage of Balkan Music Night, I decided to focus more on the madness that goes on during these events, just to give you an idea on how easy it is to get carried away with the music and dancing. Balkan Music Night draws a sizeable and diverse crowd, consisting of young and old, Americans and foreigners, and this blend of people and music makes it something truly special, as you can see in this video.

Bands and dance ensembles, mostly from the Boston area, were featured. The photos above are of two dance groups: Mladost and Ludo Mlado. This area has a very large population of Eastern European immigrants; and there were many young people getting in touch with their roots at the festival. Here is a list of this year's performers:

There is something bewitching, seducing, and magical about Balkan music. Although it's not to everyone's taste, those who love it find it addicting, and the unusual rhythms compel you to dance. This is why Balkan Music Night draws thousands of people from miles around every year. It's like a group of religious people going on a pilgrimage.

This is a glimpse of what went on close to midnight, when everyone in the place was high on endorphins. (Although there are plenty of refreshments and delicious ethnic food, no alcohol is served). If you haven't tried Croatian dancing, you should, the steps are very easy to learn and it's lots of fun. Should you get pulled into the line of dancers, go with the flow.

This work is licensed under a Creative Commons Attribution-Noncommercial-No Derivative Works 3.0 United States License.
Posted by Katley at 8:19 AM