The Martenitsa Tree-A Modern Day Folktale (Inspired by the Internet) 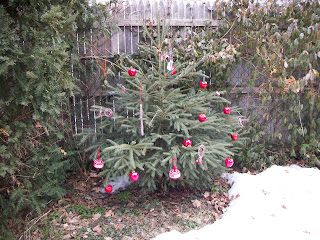 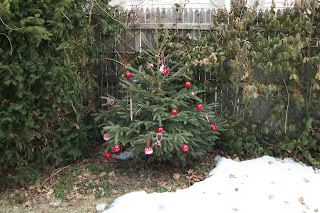 It's now almost mid-March, and Baba Marta is finally starting to smile on Massachusetts. The snow is almost gone, and the air is noticeably warmer. Even the ice cream truck made the rounds for the first time today.

Recently I read a post on the internet about Martenitsa trees springing up (pardon the pun) all over the world. Here is the link:

In response to a fellow blogger (a young lady from Bulgaria), this is my Martenitsa tree. Actually two views of it, since my yard still has the leftovers of January and February's snow, which is fast disappearing.

My tree looks nothing like the ones I saw on the Project Martenitza site, but after all, each tree is as different as its creator.

Here is the story of the Martenitsa Tree:

Once upon a time, many years ago, a little girl brought a pine tree seedling home from school. She wanted to plant it, so she asked her mother to find a home for it. Mom found the least crowded spot in the backyard, dug a hole, and forgot about it for a long, long time.

It took many years to grow. For the longest time it was dwarfed by the surrounding bushes and plants, for Baba Marta had not yet seen it.

Then one spring, the tree had a growth spurt because Mom had tied a Martenitsa on it after the first flowers bloomed in the neighborhood. Baba Marta came all the way from Bulgaria to see this tree, was pleased, and put a growth spell on it.

The tree nearly tripled in size!

It got so big that Mom decided it needed some decoration, so she tied more martenitsi on it. Then she read the martenitsa had to be placed on a fruit tree, and since a pine tree does not bear fruit, she found some apples that had been previously used as Christmas ornaments. Since Mom likes odd numbers, especially Balkan dances with nine beats to the measure, there are nine apples on the tree.

The tree grew even more. The tiny seedling that was brought home and planted over thirteen years ago is now a little over 5 feet (1.55 meters) tall!

Mom had read something on the internet recently about Martenitsa trees and mentioned them to one of her blogger buddies, a young woman from Bulgaria who went to college in Boston, and now studies in England. The young woman had mentioned that she wanted to send the picture of a Martenitsa Tree in Massachusetts to her family in Bulgaria.

Although it's nothing fancy, and it's (technically) not a fruit tree, this Martenitsa Tree is the only one in her town, and brings good luck to all who reside there. (so far this month there haven't been any snow storms).

For more on the Martenitsa, read: http://katleyplanetbg.blogspot.com/2011/02/everything-you-always-wanted-to-know.html

This work is licensed under a Creative Commons Attribution-Noncommercial-No Derivative Works 3.0 United States License.
Posted by Katley at 11:23 PM