A Cat Who Likes the Gaida, and The Cat of Gabrovo 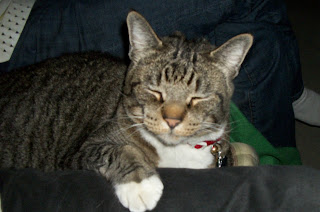 Note: Fatso went to kitty heaven the morning of April 9, 2011 after a five month battle with congestive heart failure. During his final hours with us, he was surrounded by love and Bulgarian folk music. This was written a about a week before his passing when he was doing well and we had hoped that he would make his thirteenth birthday on April 20. Such was not the case, and during the morning of April 9th, we took him to the vet when he stopped eating and had difficulty breathing despite medication and oxygen treatment. His transition was peaceful, and he was surrounded by his loving humans and the staff of the veterinary clinic. He will be missed very much.)

My Fatso is totally blissed out in the picture because he's sitting with his favorite humans.

Last spring, when I was out of town (I was at one of Zlatne Uste's gigs in NYC), my daughter called me, a little worried. She mentioned that Fatso seemed a little depressed, and he wasn't very hungry. When I returned home the first thing I did was turn on some Rhodope gaida music that I had downloaded on the computer and then I fed the kitty. He gobbled his food and then settled into his blanket lined cardboard box near the computer, totally contented.

He's my music buddy. He's a Taurus, and the two things he likes most are food and music.

We have a nighttime ritual, in which he sits or lies down nearby while I listen to Radio Bulgaria's folklore broadcasts on the computer, which come on early in the morning over there and at about 10 p.m. here.

I've noticed that he has a liking for the bagpipe (Gaida).

Why critters like musical instruments made from the bodies of other critters is a mystery to me. (The Eastern European gaida is made from goat or sheep hide.) When my husband hears one he always asks me "Who's strangling the cat?"

This is some of Fatso's favorite music. The woman playing it is amazing!

Since today is April Fool's Day, the House of Humor and Satire in Gabrovo is celebrating an anniversary. It first opened to the public on April 1, 1972. Here's the link to their site.

It is said that people in Gabrovo cut off their cat's tails to save money on heat. The Gabrovo Cat, who is a symbol of the town, is also the guest of honor at the Carnival parade.

Many years ago, Fatso lost a bit of his tail. It got caught in the door as he was trying to escape. The end of his tail was fractured and infected,and he had it surgically removed by a vet.

One morning Fatso fell asleep while I was listening to the story of the Cat of Gabrovo on BNR. He had a very strange dream, and he tells his story here.

This work is licensed under a Creative Commons Attribution-Noncommercial-No Derivative Works 3.0 United States License.
Posted by Katley at 7:57 PM