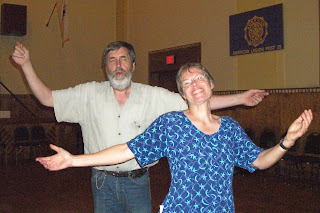 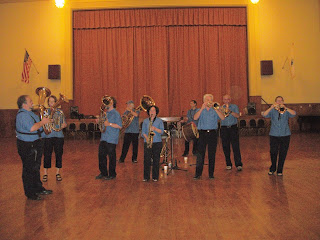 Have you ever been to one of those "cookie cutter" wedding receptions?

During the years when my friends were getting married, I went to plenty of them, and they were pretty much interchangeable, except for the couples. My husband and I had one. The format is familiar: appetizers followed by bland prime rib and then the wedding cake, all of it washed down with gallons of booze. The bride and groom entering, the first dance, the first kiss, the throw of the garter, the dance with Mom, the dance with Dad. The music, performed by a band or a DJ, is a mixture of sappy love songs, pop music, the Chicken Dance and Alley Cat.

In my next life I'd like to have a wedding reception like the one I went to recently. It was delightfully different.

The couple, Sandy and Ken, have been together a long time and surprised everyone when they announced their marriage during one of the band breaks. We all thought it was a party showcasing the Balkan brass band from New York City, Zlatne Uste.

Sandy and Ken are dancers and musicians, and play for Panharmonium, the Amherst International Folk Dance house band:

Sandy also writes a monthly article for the Danvers Herald, and a blog about growing up in Danvers, Massachusetts:

During the month of May, at one of the Friday night dances, they announced that Zlatne Uste was going to play locally, a rare event, since they usually do gigs in the New York City area (where I danced to their music at the very first Golden Festival in 1985). This was something I was not going to miss, and I marked it prominently on my calendar as soon as I knew.

It was an unforgettable experience, and the music was loud enough to wake the dead (believe it or not a few people wore earplugs).

Here's one of the videos I took during the party. This is a dance very popular in the Balkans, Devetorka.

Here's another, are we having fun yet?

I wish the happy couple the best, and I thank them for arranging one of the the most enjoyable events I have ever been to!

Their web site can be found here:

The Zlatne Uste Golden Festival, which celebrated its 26th year, has been held the third weekend of January in New York City every year since 1985. It has gotten so big that they had to move to Brooklyn.

This work is licensed under a Creative Commons Attribution-Noncommercial-No Derivative Works 3.0 United States License.
Posted by Katley at 6:49 PM