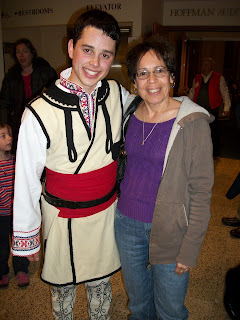 Yes, that's me in the photo with the young man in a Bulgarian folk costume. No, I wasn't flirting with him but I wanted a picture as a souvenir of an unforgettable afternoon. He was part of a performing group from Pittsburgh, Pennsylvania, the Duquense University Tamburitizans.

On Saturday, February 18, I went with a friend to a Tamburitzans performance in West Hartford, Connecticut. Since the management forbade taking videos of the show, and no flash photography was allowed (the hall was quite dark), my friend took this photo of me with one of the dancers.

The Duquense University Tamburitzans are a student group from a school in Pennsylvania who perform music and dance from Eastern Europe. And they give a great show.

The Tamburitzans began as a small musical ensemble playing Croatian folk music back in 1937. More people joined as the years passed, as the ethnic community in Pittsburgh grew. This year they mark their 75th anniversary performing on stage delighting us with the folk music and dance of Eastern Europe. This is one of the longest-running folklore shows around. The Tamburitzans are full time students and amateur dancers and musicians who perform on weekends, traveling around the United States. Not familiar with Croatian folk music? Check out this video. This is a Croatian tamburitza ensemble, which is how the group started out.

For more on tamburitza orchestras and their instruments read this:

On the Universe of YouTube, I found a commercial about the Duequense University Tamburitzans. It gives a bit of the history of the ensemble with some excerpts from last year's show. I heard Macedonian, Bulgarian, Slovak, Serbian and Bavarian music in there. (by the way the best numbers in this year's show were from Macedonia, Bulgaria and Serbia).

For more information, you can go to the Tamburitzans website, where you can read a short history of the group, and find out if they'll be in your neighborhood anytime soon. It is a performance not to be missed.

If you enjoyed this you may also like: Folklore, Food and Fun at Festivals (with some Greek and Bulgarian live performances)

A Romanian Festival with an Albanian Accent: A writeup of a local festival that I went to last summer.

This work is licensed under a Creative Commons Attribution-Noncommercial-No Derivative Works 3.0 United States License.
Posted by Katley at 10:37 AM