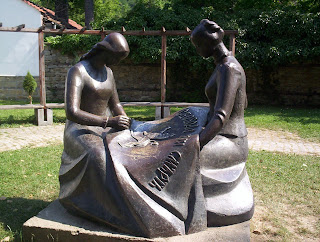 Better the grave than a slave. Bulgarian proverb

Today we're going to explore rebel songs in Bulgarian folklore, in honor of the April Uprising of 1876.

The Ottoman Turks occupied the Balkans for nearly 500 years. Religious conflict was a recurring theme in Eastern Europe and the Muslim Turks were at odds with the Orthodox Christian population of the Balkans who were subjected to what could be considered a form of slavery.

The Ottoman rule was quite harsh. The Turks taxed the population heavily and conscripted preadolescent boys into the Janissaries, the Sultan's elite army. These young men were taken forcibly from their families, sent to Turkey, converted to Islam, and subjected to extreme discipline when they were old enough to join the ranks of the Janissaries. The Bulgarians and other people of the Balkan countries got fed up with these injustices, and rose up against their Ottoman oppressors.

The April Uprising in Bulgaria was the start of a series of events which eventually led to the country's independence. The rebels, called Haidouks, the most renowned being the poet Hristo Botev, were ready to die for the cause and for their country. This song, based on a poem by Ivan Vazov, describes Botev's hijacking of the ship Radetsky from Romania to Bulgaria, and how the revolutionaries crossed the Danube to overthrow their Turkish oppressors. Not long after, on June 2, Botev died in battle near the town of Vratsa.

The translation for the song can be found here (although, as usual something gets a little bit lost....)

The story of a female freedom fighter who took part in the liberation of Bulgaria is very powerful and moving. Her name was Raina Popgeorgieva. Also known as Princess Raina, she was a teacher, midwife, and a revolutionary. She was a true feminist, in this respect she was way ahead of her time. She sewed the flag for the April Uprising and waved it with a fellow revolutionary, in defiance of the oppressors, who captured her and locked her up in Plovdiv prison. She subsisted on bread and water for over a month, and after she was released, she left Bulgaria and moved to Russia, where she studied medicine, and later became a nurse. Raina then returned to Bulgaria, married and had a family. There is a statue of her in Panagyurishte, Bulgaria, her home town. She died at the age of 61.

This song tells the story of Raina Popgeorgieva. The dance done to it is lesnoto, the rhythm is galloping-apple-apple.

You can read more about Princess Raina here.
http://en.wikipedia.org/wiki/Rayna_Knyaginya

Karamfil is very popular dance-song, and it's from the Pirin region of Bulgaria.

The last song is Sokole,Siri Sokole. (Gray Falcon) The falcon is a bird of prey and used as a symbol in a number of Bulgarian and Macedonian rebel songs. The video accompanying the song portrays the capture of a rebel being subjected to torture by the Ottomans. It is not pleasant to watch, but will give you an idea of what the Bulgarians went through to overthrow Turkish rule.

If you enjoyed this, you may also like Hristo Botev, Poet and Revolutionary, the story of Bulgaria's most beloved hero.

Kaicho Kumenov, the singer of Sokole, Siri Sokole, also made a recording of a more lighthearted folk song, Kune Mome. Here you can hear it along with a more modern version.

If you love flowers, this post is for you. Our hero, Karamfil, came from the Rose Valley, read more about it here.

This work is licensed under a Creative Commons Attribution-Noncommercial-No Derivative Works 3.0 United States License.
Posted by Katley at 10:04 PM