There's a First Time for Everything..... 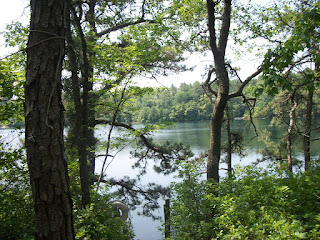 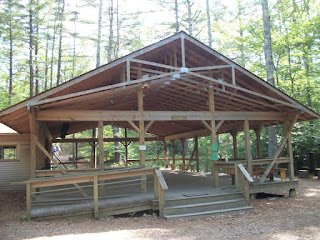 (photo 1: view of Round Pond from the back of my cabin at Pinewoods Camp) (photo 2: C#minor, one of the dance pavilions where workshops were held both taken by KDB)

When the student is ready, the master appears. ~Buddhist Proverb

Although I've been doing Balkan dance for a long time, I have never been to dance camp. For those of you who have been wondering why I haven't posted in a while, I didn't fall off the planet, although there were times I thought I did :) This also was the first time I'd been on vacation without my husband and family (who think Balkan dancing is a form of torture set to music).

There are times you have to try something different. This spring I decided to get brave and try something new and that was spending a weekend at a folk dance camp near Plymouth, Massachusetts.

The camp was in the middle of nowhere and practically off the grid, with little internet or cell phone access, although we did have electricity, and the food was excellent. I was expecting mass-produced cafeteria food, what we had were gourmet meals made from scratch with fresh ingredients, served family-style in a dining hall with a view of one of the lakes. Now that was totally unexpected.

Camp was a great way to get away from the everyday world. I stayed in a cabin with seven other people and had two roommates. We went to dance parties in one of the large pavilions every night; since the grounds were extremely dark one of my cabin mates always accompanied me back after parties since it is easy for a newbie to get lost here even during the day. By the way, flashlights were mandatory for every camper, but the brightest headlamp in the world would not have kept me from getting lost.

One of the reasons I went to camp was that there were workshops in Serbian folk dancing. Many years ago when I first took up Balkan dancing, Serbian dance was one of the first things I learned. I loved the music, which is what sold me into going to camp for the weekend.

The workshop leader and teacher, Miroslav, is the artistic director of the Academy of Serbian Folk Dancing in Toronto, Canada. You can visit his site by clicking the link below.

If you want to see the Academy of Serbian Folk Dancing in action, watch this video. You will get exhausted just watching them, they have amazing energy. By the way the first dance in this medley was one that was taught in one of the workshops but for the life of me I can't remember the name...

Here they are again, performing in Orlando, Florida:

Miroslav was energetic, and his enthusiasm was contagious. He taught us a number of dances, most of them unfamiliar to me: Cicino Kolo, Pre Picor, Vlasinka and Veliko Backo Kolo. There was also an advanced class for those who were brave enough to try it; in that class was taught Toplicki Cacak and something I can hardly pronounce (let alone dance), Svrljig.

Not only were there workshops during the day, there were dance parties at night accompanied by the Pinewoods Band. The musicians played favorites from the Balkans, Turkey and English Country Dances (they were workshops in this as well, but since English Country is not my thing, and the weather was hot, I spent country dance time cooling off in one of the two lakes on the grounds.) The picture on top was the lake in front of my cabin, you could walk outside down a flight of stairs and be in the water.

Bre Devojce, from Kosovo, was one of the songs I learned during the singing workshop, held on the porch of the dining area after lunch. There was also a dance to go with it, which Miroslav taught. It's on the next video, along with the lyrics, you can sing along.

How was my first time experience at dance camp? I brought back memories of good times: nighttime parties where the smell of bug repellent was so strong that I will always associate DEET with outdoor folk dancing. Other memorable moments included an impromptu chorus of women singing beautiful Bulgarian folk songs and midnight swims under the stars.

The exhaustion caught up with me when I arrived home. I felt like I had participated in a form of Folk Dance Olympics. Now I'm ready for a gold medal :)

If you like Serbian folk music you can check out two of my earlier posts.

This work is licensed under a Creative Commons Attribution-Noncommercial-No Derivative Works 3.0 United States License.
Posted by Katley at 7:55 AM