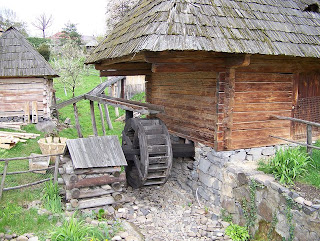 (water wheel, but where's the water? Photo from Wikipedia Commons)

The water mill, or wheel, was used to make power to grind the grain, back in the days before electricity. Harnessing the power of running water was a very clever thing to do, and it's a renewable, non-polluting energy source. The water wheel is the forerunner of today's hydroelectric plants.

In the first video, twins Iva and Eva Valentinova perform a lively song about a water wheel, called "vodenitsa" in Bulgarian. There is plenty of dancing as well, and you can actually see the water wheel in action at the very beginning of the video.

The second song is about a miller in love with a girl...but there's no water to grind the corn! Somehow the lyrics got lost in translation, when I checked them out using Google Translate, the English didn't translate well. It doesn't matter, really, the song is a delight to listen to. The best thing about Bulgarian folk songs is that you can dance to most of them. The dance done to this song is a Devetorka. (If you want to see a Devetorka, there is a link to it in one of my previous posts; check out the list further down.)

For more on water mills in Bulgarian folklore, check out this link from Bulgarian National Radio. (Notice that they mistakenly called them windmills). The stories about them are quite interesting, and the songs are great to listen to.

If you enjoyed this you may also like The Bulgarian Fascination with Water:

A brass band and people in elaborate embroidered costumes dancing a Devetorka (in the first video) on the banks of the River of Many Names is one of the highlights of this post.

This work is licensed under a Creative Commons Attribution-Noncommercial-No Derivative Works 3.0 United States License.
Posted by Katley at 7:56 PM