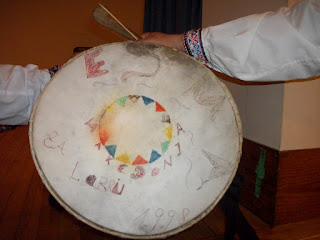 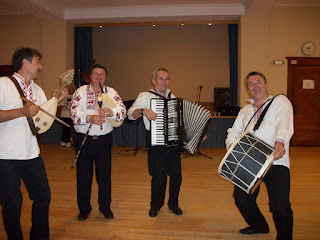 Esma would have plenty to say. She has done quite a bit of traveling in Bulgaria and the United States.

Giving names to inanimate objects is not unusual. People give names to cars and boats. It gives them personality, and even power. If you speak or understand an language other than English, which ascribes genders to nouns, this naming thing starts to make sense. For example, Spanish has masculine and feminine nouns. Things get even more complex in languages like German and Bulgarian, which have masculine, feminine and neuter nouns.

But this post isn't about the complexities of grammar and language, it's about music.

In this case, Esma is a very important part of her band. She's very colorful and loves keeping time (with a little help from her friends). What's unusual is that although she belongs to a Bulgarian band, the writing on her is in the Roman, not Cyrillic, alphabet.

Esma belongs to Kabile, a band from the Thracian region of Bulgaria, which is making yet another tour of the United States (the previous ones were in 2008 and 2010). She is a tupan, a double-headed drum who likes odd rhythms like 7/8 and 11/16.

Esma especially likes rachenitsa, the national dance of Bulgaria, which is in 7/8 time. Check out the video here:

Several of us watched a demonstration of a Bulgarian gaida (bagpipe), by one of the musicians, Dzhenko Andreev. There were musical instruments and CD's for sale on the table. If I had the time and the money, I wouldn't mind taking up kaval (an open ended flute). I don't have the lung power for playing the gaida.

Later in the evening,we danced to a kaval solo performed by Nikolay Doktorov. This is a tropanka (stamping dance) from Dobrudja, northeastern Bulgaria.

Kabile will be performing all over the United States between August and November of this year, with Esma in tow. If you would like to find the venue nearest you, click the link below:

An Unforgettable Evening with Kabile (complete with video from their previous U.S. tour in 2010)

Check out some really great music played on gadulka, which includes a solo performance by Nicolai Kolev of Kabile.

This work is licensed under a Creative Commons Attribution-Noncommercial-No Derivative Works 3.0 United States License.
Posted by Katley at 11:56 AM