The Colors of Bulgarian Folk Songs 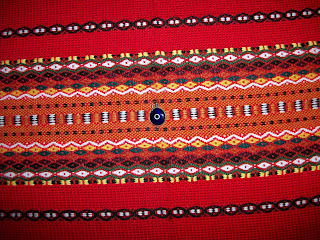 Light in Nature creates the movement of colors.
Robert Delaunay

Today's post was inspired by the Bulgarian National Radio.  They had a program recently on color symbolism in Bulgarian folklore several weeks ago and you can find the link here:

Red is mentioned quite often in Bulgarian folk songs, often in connection with wine.  A powerful, attention getting, and vibrant color (see photo above), red is the color of fire, passion, wine and blood. I've noticed lots of red in Bulgarian folk costumes as well. It is considered a lucky color.

Rusi Kosi is a song about a blonde who has no comb, and no powder for her white face (by the way, white has several meanings in Bulgarian, and in this case a white face is a beautiful face). She wonders when her mother will find her a man to marry who will buy her the comb and the powder. The girl's name is Elena, and she has to bring the red wine and two red apples. The translation comes from Bulgarian by way of German and it's from the Songbook for Nearsighted People, a compilation of international folk song lyrics by Birgitt Karlson.

The full moon rises, red, orange, and then white in the song Izgryala e Mesechinka while the young woman picks a colorful bouquet in the moonlit garden. This is a modern version of a beautiful Bulgarian folk song played on a gadulka and a guitar, and the lady who plays the gadulka, Hristina Beleva, has a very pretty voice.  The dance in the video is a rachenitsa, the national dance of Bulgaria, with the irregular rhythm of 7/8 (apple-apple-pineapple).

The next video is so colorful it will draw you right in. The song is Dunave, Beli Dunave, which means White Danube. Most people associate the Danube with the color blue, maybe because it rhymes so well (in English and in German), however when I actually saw the river, it was a totally different group of colors (more like green, gold, and gray). In the video, however, it looks blue and sometimes white.

I often wondered why there were several Bulgarian folk songs on this topic; until I found out that white can also mean beautiful. White in Bulgarian folklore has a lot of symbolism, according to the Bulgarian National Radio: "the white color also means joy, grandeur and beauty", as well as purity and innocence.

The River of Many Names is also very colorful, and in addition to the aforementioned colors, it can also be white on foggy days.   In Oriahovo, where the was video was taken, the performers had to wait two hours for the fog to burn off so they could shoot it.  By the way the composer Diko Iliev lived for many years in this town, and the piece Dunavsko Horo composed there. The reason brass music is so popular in northwestern Bulgaria is due to the influence of Diko Iliev.

The dancers wear colorful and elaborate embroidered costumes; this and the brass band music are a treat for the eyes and ears. Unfortunately, I couldn't find the translation for the song, if anyone can tell me where to find it, please post it in the comments section.

The eyes have it in this video, with a very attractive dark-eyed woman who flashes those orbs around  while pouring the wine.  The singer is Daniel Spasov, who co-hosts a weekly folklore show on Bulgarian television, Ide Nashenskata Muzika, along with Milen Ivanov.

The "Flavors" of Bulgarian Rachenitsa (parts 1 and 2)

Part 1: About rachenitsa, the national dance of Bulgaria

Part 2  Masculine, Feminine and Flirty (rachenitsa as a courtship dance)

The River of Many Names (parts 2 and 4) features folk songs and dances from Bulgaria about the Danube. It's a very colorful excursion into the world of Bulgarian folk music.

Modern Versions of Traditional Bulgarian Folk Songs, Part 1  (you will find modern versions of two of today's songs in this post, along with the traditional ones so you can compare them.)

This work is licensed under a Creative Commons Attribution-Noncommercial-No Derivative Works 3.0 United States License.
Posted by Katley at 7:50 PM