Balkan Music Night 2014: A Celebration of Music and Dance 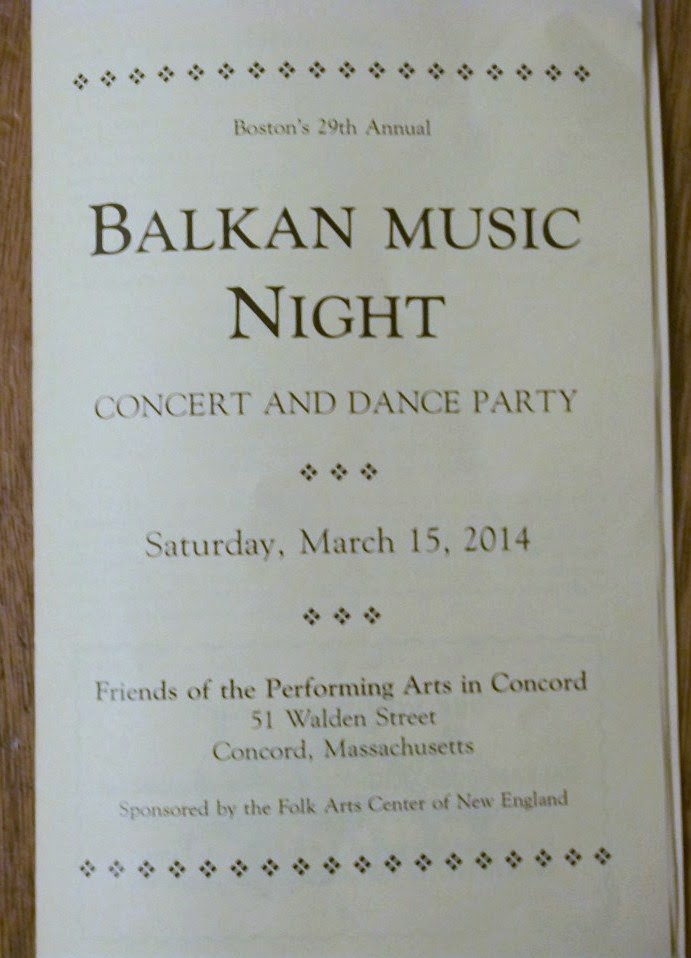 Movie-making is telling a story with the best technology at your disposal.
Tom Hanks

I have been around long enough to see large computers shrunk down to the size of Smartphones.  Smartphones are truly amazing in that they have enormous capabilities: besides using them to talk to people, you can text, take pictures and video, and access the Internet, among other things.

Today's post features videos taken by phone from Balkan Music Night 2014 in Concord Massachusetts. It is an annual event that has been going on for nearly 30 years.  30 years ago PC's were big, bulky things run by a DOS operating system.  Are there any readers out there who remember the days of dual floppy disk drives?

We have come a long way since then.  It's really amazing how you can broadcast yourself on YouTube with something small enough to fit in your back pocket.

It's time to visit The Universe of YouTube, via the magic of technology. The first video is of Ličko Kolo, from Croatia.  The dancers create the music by singing and stamping their feet, something quite unusual in the age of electronic music.   It's also a call and response song.  Call and response songs are common to many cultures and the Balkans are no exception.

The person who posted it used an I-Phone and I am amazed at the quality of the sound as well as the way he composed the video.

Here's another snippet; this time it's the Harris Brothers on brass instruments playing a tune from Macedonia.

The sound quality on this video is not as good as the previous ones. My little Android is not the top of the line Smartphone, but it's light and not as bulky as my old digital camera (every time someone invents new and improved devices they shrink in size). This group, Niva, was one of my favorites at Balkan Music Night. You can see me fumbling with my fingers at the start of the video because the camera function is in the back of the phone.

If you really want to hear how good Niva sounds, click this link. This will take you to the songs played at the Zlatne Uste Golden Festival, another event similar to Balkan Music Night.  The one in the video is song #4.

A Taste of Albania at Balkan Music Night 2013

"Music is the Strongest Form of Magic" Balkan Music Night 2012

This work is licensed under a Creative Commons Attribution-Noncommercial-No Derivative Works 3.0 United States License.
Posted by Katley at 9:13 PM