Call-and-response is a time-tested technique for getting attention, not just in classrooms but in the military, in churches, at sports events, and in traditional cultures in various parts of the world. Instead of repeating yourself, train students to respond to a fun or inspiring statement! 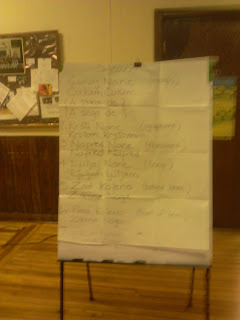 Last week at dance we reviewed the dance and the calls for Daichovo Horo. It is a dance in 9/8 or 9/16 from northern Bulgarian and supposedly named after a rich cattle merchant from Pleven named Daicho.

The "village Daichovo" is an easy dance that anyone can do. Read a description of it here.

Video #1 is an example of a "village" Daichovo.

The version that we did was more complex with different calls and responses.  A member of our group wrote them down (in transliteration, since very few of us can read or write Bulgarian Cyrillic) and posted them (see photo at beginning of post.)

After researching further, I found that there were even more calls and responses.  See complete list here from Dick Oakes' Phantom Ranch website.

I check Google searches on this blog and I found that "Daichovo calls" was often requested.  The choreographed version of the dance is in Video #2.  The music is from an old recording by Bulgarian accordionist, Boris Karlov (1924-1964). The dance is sometimes known by the name Zizaj Nane.

This work is licensed under a Creative Commons Attribution-Noncommercial-No Derivative Works 3.0 United States License.
Posted by Katley at 10:05 PM