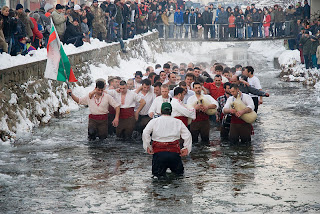 Today's post will be about some interesting New Year rituals.

In Bulgaria, the New Year is welcomed with a ritual called Surva. According to the Bulgarian National Radio website, "very early in the morning on 1 Jan. boys (survakari) tour the community with best wishes for the New Year. They use decorated cornel twigs gently beating neighbors on their backs, for the sake of health, endurance and prosperity."

The noise and the cowbells in this video serve to frighten away the evil spirits and the fire symbolizes the return of the sun in this very noisy Surva celebration. The fun doesn't end on New Year's Eve, at least not in Bulgaria!

Jumping into a frigid body of water in January seems to be the thing to do to stave off the boredom of winter, and in my humble opinion, you have to be either drunk or out of your mind to think about it. If you live in New England, like I do, the ocean is freezing cold even in mid-July, and I've compared it to taking the Kneipp Cure.

Sebastian Kneipp, a monk from Germany, was one of the first to popularize the cold water treatment. He claimed it cured him of tuberculosis, which was a very common ailment in those days. He may have been on to something. http://www.kisthydrotherapy.com/cms/history.php

The Polar Bear Club, founded over 100 years ago in Coney Island, New York, was one of the first organizations to begin the New Year by taking a dip in the icy ocean. Any hangovers from the previous night will certainly be obliterated in that 38 degree water.

For more on the Polar Bear Club, read: http://www.polarbearclub.org/

The Christian holiday of Epiphany falls on January 6th. In Latin America, Epiphany is Three Kings Day. It is said that this on this day the Kings arrived at the manger of the infant Jesus and presented him with gifts of gold, frankincense and myrrh. Three Kings Day celebrations involve lots of singing and dancing as you can see in this video from Puerto Rico.

Epiphany takes on an interesting twist in Eastern Europe. There, the focus is more on commemorating the baptism of Jesus. Another name for the holiday is St. Jordan's Day, and it involves a group of men plunging into freezing cold water to retrieve a cross thrown into it by a priest. This custom is practiced by those of the Eastern Orthodox faith, which is the predominant religion the Balkans and in Russia. In Russia, where lakes and rivers often freeze solid, a hole will be cut into the ice.

The cross throwing ritual accomplishes two purposes: the first one is to bless and purify the water, the second is for health and good luck, especially to the person who retrieves it. Here's a group of men (notice that all the participants are male) taking a dive into the icy Danube near the town of Svishtov. Snow flurries fall from the sky and the audience on the riverbank is bundled up in heavy winter coats.

In this clip from a news program, a bunch of people dance in the Tundzha River and several men play the gaida!  Either they have been endowed with supernatural powers that overcome the effect of frigid water, or they have been hitting the rakia :)

For more about water in Bulgarian folklore read: http://katleyplanetbg.blogspot.com/2010/03/bulgarian-fascination-with-water.html

This work is licensed under a Creative Commons Attribution-Noncommercial-No Derivative Works 3.0 United States License.
Posted by Katley at 4:39 PM