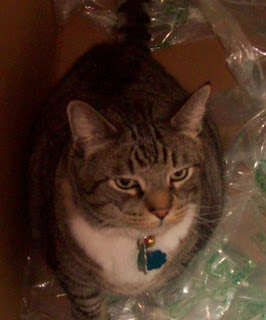 Tomorrow would have been his thirteenth birthday.

Recently I lost a very good friend and member of the family. He has been featured on this blog a number of times because he was my partner in musical crime, that is, he liked Bulgarian folk music. He had a loving family, and a wonderful life, his loss has left a void in our lives and a paw print on our hearts.

My cat, Fatso, died after a five month battle with heart disease, eleven days short of his birthday, on April 9. He has been with us since he was ten months old, when we adopted him from a shelter. My children grew up with him, he was their constant companion during the trials of adolescence, and their comfort when life was difficult.

Congestive heart failure is a terrible way to go, in both people and animals. The heart doesn't pump efficiently, and the result is fluid buildup in the body. Medication helps, but all it does is prolong life for a short time by eliminating the excess fluid; the heart becomes progressively weaker, and death ensues.

An aunt and a close friend have succumbed to heart disease during the past year, which has made Fatso's death especially painful. It's the people who are left behind who suffer the most. The deceased are in a better place.

You can read the tribute to my aunt here: http://katleyplanetbg.blogspot.com/2010/07/when-i-die-dont-cry-for-me.html

The best way to remember those who passed is to celebrate their lives, and this I will do with video and music.

In this clip, Fatso's playing a game with my daughter. And that's not Bulgarian folk music in the background, but In the Hall of the Mountain King by Grieg.

If you click this next link, you'll see him lying on the bed, relaxing to some music by the Bisserov sisters, a folklore group from the Pirin region of Bulgaria. His tail flicks in time to the music.

There is a tradition of playing bagpipes at funerals. This custom started with the Irish immigrants who came to the United States. Many of them were in a dangerous line of work such as police or fire fighting, and death in the line of duty was frequent. It became a tradition to send the deceased off with bagpipe music which was loud and mournful and suited the mood of those left behind.

Since my Fatso liked the gaida, the Eastern European version of the bagpipe, here's Valya Balkanska's version of the Bulgarian folk song Izlel e Delyu Haidutin. It's very haunting and beautiful and her voice is accompanied by a gaida. This song was shot into outer space many years ago during the Project Voyager in 1977 as a greeting from earthlings to extraterrestrials. I hope Fatso can hear it up in the Great Beyond. He is with me in spirit, I know.

This work is licensed under a Creative Commons Attribution-Noncommercial-No Derivative Works 3.0 United States License.
Posted by Katley at 6:12 PM