What Butchers did for Fun: The Butcher's Dance in Balkan Folklore (another cross-cultural comparison) 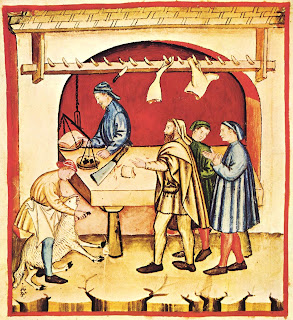 (Picture from Wikipedia, depicting the occupation of butcher in the Middle Ages)

In the Balkans, meat is an significant part of the diet, and the butcher played an important role in the community. His job was a dirty, but essential one, slaughtering animals, cutting them into smaller pieces, and preserving meat in the form of sausage, back in the days when there was no refrigeration.

I used to accompany my dad to the butcher shop and the live poultry market every Saturday morning. The butcher shop, owned by a Spaniard who was a friend of my father, was a traditional one, complete with sawdust on the floor, and a meat grinding machine. He took large cuts of meat and prepared them for you personally, his steaks and pork chops were the best I'd eaten. The meat was wrapped, not in plastic, but in brown waxed paper. As for the poultry market, that place was pretty nasty, with the stink of chicken crap permeating the establishment, and rows of chickens in cages waiting their turn for the chopping block. Although it was disgusting, I was more in touch with where my food came from than my kids, who see meat packaged in plastic, in refrigerated display cases at the supermarket.

When butchers weren't busy slaughtering animals, cutting, grinding, slicing and dicing or otherwise playing with their meat, they were dancing.

The first dance, Hasapiko, is often performed at Hellenic festivals, and usually by men showing off their fancy moves. Hasapiko means butcher in Greek, and this was originally the dance of the Butcher's Guild in Greece, which in those days was a part of the Ottoman Empire. The etymology of Hasapiko can be found here:

Hasapiko can be freestyle (the leader calling the steps), or it can have a designated choreography (folk dance groups often prefer the latter). This dance is one of my favorites, and although it's challenging, it's lots of fun. Although traditonally, Hasapiko is a men's dance, we women like to crash the line. If they don't let us in the line, we make our own!

The next Butchers' Dance is from northwestern Bulgaria. The word "Kasap" means butcher in Turkish, and since the Turks dominated Bulgaria for over 500 years, a few Turkish words made their way into the language. The word for butcher in Bulgarian is kasapin, the dance shown here is Kasapsko Horo.

Notice in these two videos the groups use a shoulder hold, which is common in men's dances.

The Macedonians, not to be outdone, have their own version of the butcher's dance, Kasapsko Oro. This dance, like the previous one, is equal opportunity, both men and women dance in this video.

This work is licensed under a Creative Commons Attribution-Noncommercial-No Derivative Works 3.0 United States License.
Posted by Katley at 9:24 AM